Recently I wrote a post on the stations of the Disneyland Paris Railroad (click here to read) and today I will be looking at the locomotive that was running on it. My visit to the park was at the end of peak season so unfortunately only one locomotive was running instead of the usual 2. This was a shame as it meant I only got to see 1 of the 4 locomotives in the Disney fleet. 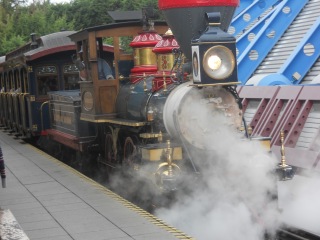 So today we are looking at the 4-4-0 narrow gauge locomotive called “George Washington”. She is a 3ft live steam locomotive and has a top speed of 20mph. All four locos owned by Disneyland are Jupiter class locos built by Severn Lamb who are based in the Alcester in Warwickshire. Who said the UK doesnt build steam locomotives anymore. 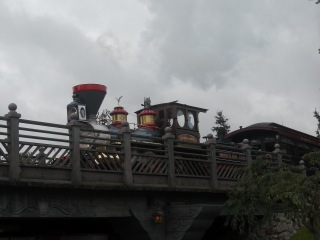 On the bridge in Adventureland
The disappointment of seeing 1 of the 4 locomotives was outweighed by how impressed I was by the performance of George Washington, as I was at the park for 5 days and the loco was in service all 5 of those days. For a narrow gauge locomotive to haul trains without incident for 5 days in a row at a world-class attraction is very impressive. She weighs 50,000lbs and has the power to haul as many as 320 guests in four coaches on a flat track.
George Washington is currently in a blue, white and red livery which has been designed to represent both America and France. 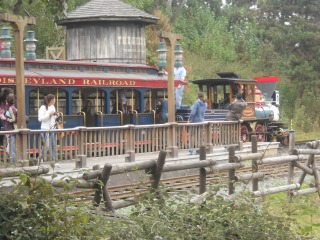 The locomotive has its own set of unique carriages which match its right, white and blue livery. The coaches have been named in references to places where Washington achieved famous events: Mt. Vernon, Boston, Philadelphia, Yorktown and Valley Forge. Coaches are of traditional timber design and constructed in reinforced polyester on steel frames for longevity and ease of maintenance. 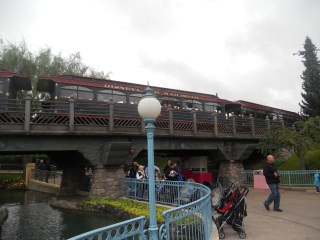 The train travels over Adventerland.

I doubt you will find a steam locomotive anywhere in the UK that covers as many miles a year hauling passenger trains as the locomotives of the Disneyland Paris Railroad. I had a throughly enjoyable experience behind them and would recommend you visit them … after you have met Mickey Mouse of course.

One thought on “The Disneyland Paris Railroad – George Washington”