Tonight’s blog post is a quick update from the post earlier in the week in regards to the Bluebell Railway’s latest locomotive news in respect to the overhaul of 73082 Camelot.  We’re pleased to report that the locomotive’s boiler has passed its’ steam test at Crewe, with further details on the society’s website www.73082-camelot.com. 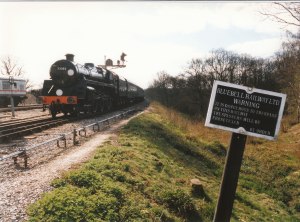 73082 Camelot is a special member of the BR Standard 5MT class, being the only surviving “Standard Arthur,” a batch of southern region machines that were replacements of elderly ex-LSWR N15 King Arthur class locomotives, from which they gained their names.  The locomotive is an important member of the Bluebell Railway’s fleet, being relatively modern, reliable and with the perfect power to efficiency ratio for the line. To find out more about the locomotive, check out the special model feature (click here) published in 2013, Illustrated with pictures of a 00 scale version of the prototype.

It’s great to hear that it is another step closer to running again!