The Bodmin and Wenford Railway will be holding their Steam Spring Gala over 2nd-4th May 2015.  The line is one of the best heritage railways when it comes to running prototypically correct stock and the gala will be no exception with a locomotive line-up consisting of ex London and South Western and ex Great Western Railway locomotives.  Of particular interest for many will be that the National Collection’s ex-LSWR Beattie Well Tank 30587, as it is to temporarily change identity to 30586 – the only example of the three classmates to survive into British Railways ownership that was not preserved.  Changing identity will not be a simple case of re-numbering, as there were differences between the three Well Tanks that worked the Bodmin and Wadebridge Railway.  To recreate 30586, wooden 12 foot long square splashers are being built.  The transformation is being done with the support of Ben Oliver Photography who are running the locomotive as a (now fully booked) charter. 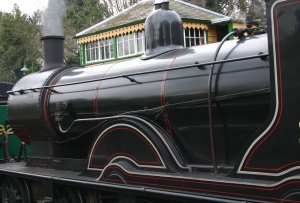 Another NRM ex-LSWR (T9 class 30120) locomotive is planned to run throughout the gala, whilst pannier tank engines 4612 and 6435 represent the western region.

Details of the gala and timetable can be found on the Bodmin and Wenford Railway’s website – click here for more.