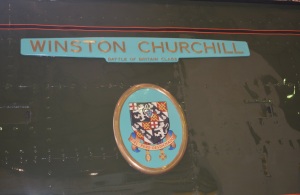 Tonight we are looking at a rather special locomotive that has recently completed a cosmic overhaul at the Mid Hants and is now on display at the National Railway Museum. This is probably the most famous member of OVS Bulleid’s Battle of Britain class and as a result is rightly a member of the National Collection.  Its’ fame comes from it being the locomotive that hauled Sir Winston Churchill’s funeral train on 30th January 1965. The locomotive was taken into the National Collection as an example of Bulleid’s unorthodox designs, with boxpox wheels, thermic syphons and air-smoothed casing.  It visited the Watercress Line as a guest for the 2012 Autumn Steam gala to help raise for its cosmetic restoration. 3 years later and £45,000 of funding saw the locomotive return to its former glory. The locomotive was then returned to York in January to mark the 50th anniversary of the great mans funeral.

She did look rather stunning and my photos don’t do justice to the amazing work done by the Watercress Lines staff. The locomotive also became the flagship locomotive of the Mid Hants “Mind the Gap” project which aimed to preserve the railway line by providing 14 young people with two-year apprenticeships in heritage engineering and carpentry. This project was so successful it was a finalist in the 2015 National Lottery Awards.