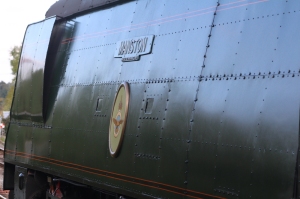 Battle of Britain class Manston has the honour of being the last locomotive to be built by Southern Railway.  It was originally numbered 21C170 when it emerged from Brighton Works in November 1947 in malachite green livery, in contrast to the later BR Brunswick green livery it now carries in preservation.  Manston’s other claim to fame is hauling the first Thanet Belle Pullman train from Ramsgate to London Victoria the following year.  Manston spent much of its early life operating in Kent until displaced by electrification to the South West.  Manston’s final shed was Exmouth Junction. 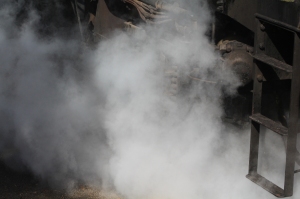 Withdrawn in 1964, Manston was lucky enough to be sent to Barry scrapyard where it remained until 1983 when it was purchased by the Manston Locomotive Preservation Society and moved to some sidings at Richborough power station.  The restoration and fund raising work slowly progressed whilst there, but the loco was forced to vacate because of the approaching closure of the power station.  After a brief spell on the Great Central Railway, Manston joined Southern Locomotives Limited and moved to Sellinge in Kent in 1998. 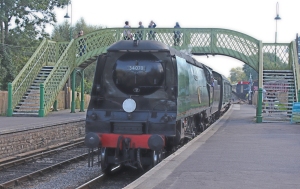 Southern Locomotives main base relocated to Herston works on the Swanage Railway where restoration of Manston continued.  As its original tender was scrapped, Manston needed a brand new one, something it has in common with many ex-Barry Locomotives. 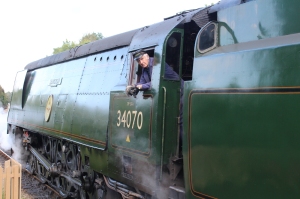 Manston was completed in 2008 and is a regular running locomotive on the Swanage Railway.  I was happy to see it in steam for the first time this year and hope to see more of it in the future!

One thought on “The Last Southern Railway Steam Locomotive”