The City of York Council working with Network Rail, the National Railway Museum and the Homes and Communities Agency have created a “new vision” for York.  The scheme includes various improvements of how the railway station is accessed from the city centre and the redevelopment of the city’s largest (178 acre) brownfield site located behind York Central railway station.  The proposed development would see 2,500 new homes, 120,000 square metres of office space creating 7,000 new jobs and of particular interest to this blog – more space to expand and improve the world’s largest railway museum! 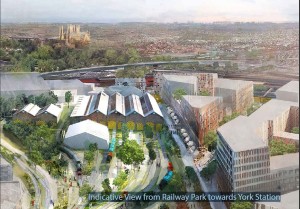 Paul Kirkman, Director of the National Railway Museum has stated:

We are working on big plans to transform our museum to tell the epic story of railways, increase our contemporary relevance and grow our visitor numbers to over one million per year. We aim to engage and inspire new and broader audiences, including schools, families , and more of York’s existing seven million visitors , with this world-changing story that continues to affect all our lives today.

“We want to be at the heart of this exciting York Central development, which offers once in a generation opportunity to transform the museum and its surroundings. We are committed to working in partnership with City of York Council, Network Rail and the Homes and Communities Agency to make the development a success for the city and to provide an enhanced museum experience for both residents and visitors alike. We look forward to sharing our plans as part of the council’s consultation in the New Year.

The proposals are at an early stage and consultations will begin in January 2016.  We will be keeping a close eye on this as it develops!

For more information go to www.york.gov.uk/yorkcentral