Those of you who have been following this year’s advent calendar will have seen that there have been plenty of festive shots from the Watercress Line.  As with many preserved lines, the Mid-Hants Railway is very busy at this time of year and there are plenty of special services, with Christmas dinners and Santa Specials. A lot of effort goes into creating a festive atmosphere, with Christmas lights and tinsel aplenty!

There is a very strong association between Christmas and railways.  There are many potential reasons for this, such as railways formally being the primary mode of transport for people returning home to their families.  I’m sure the traditional model train under the Christmas tree has also helped this association.  Many of the traditions surrounding Christmas were introduced by Price Albert and Queen Victoria – the Christmas tree being one example.  Trains both model and real have been around since these times and so it could be said that the development of railways and modern Christmas traditions have been running side by side since the nineteenth century.

December marks the last month that 850 Lord Nelson will be running before withdrawal as it’s boiler certificate expires at the end of the month.  So it’s good to see that it has been in action hauling Father Christmas, gifts and guests.  For details of Santa Specials and other services, check out the railway’s website – www.watercressline.co.uk. 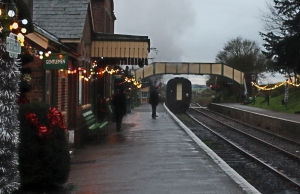 The fun continues after Christmas with it’s popular World War 2 “Christmas leave” event on 26th and 27th December.  As things stand, 850 Lord Nelson is to be the back-up engine for this event.

One thought on “December Steam”