Yesterday, on Monday 16th May 2016 35006 P&O made her triumphant return to steam after over 30 years of painstaking restoration by volunteers at Toddington on the GWSR. Thanks to the generosity (and slight disorganisation 😉 ) of my co-bloggers (thanks again chaps!), I went along to the shareholders’ and supporters’ launch ceremony.

When I arrived the 12 coach train putting together our two main rakes of carriages was being put together, and P&O was shuffling up and down the yard, seemingly for no other reason other than because the driver could!

At around midday we all gathered round to hear from the society chairman John Macmillan, the first society chairman Bill Trite; who told us about he trials of rescuing a locomotive from Barry and the very real risk that by the late ’70s the remaining locos may have been cut up, the very last BR fireman to crew P&O David Brown; who recalled his story of firing P&O, and finally the railway’s president, Pete Waterman;who before unveiling the locomotive’s nameplates officially renaming it admitted that whilst he was a western man at heart (to much disapprovingly “ooh”ing!) extolled the virtues of such a free steaming boiler.

Then we all got on the train and enjoyed finally being hauled by this mammoth restoration task for the first time, for two round trips to Cheltenham and back. Even with 12 coaches on she barely even noticed and ran like a dream, with virtually no problems. The weather was fair resulting in some decent photographs below; hope you enjoy: 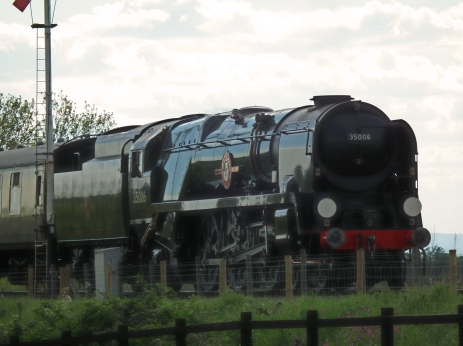 P&O passing the signals at Cheltenham 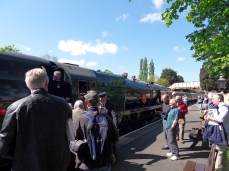 P&O posing for her supporters at Toddington

The 12 coach train coming round chicken curve just past Winchcombe

35006 taking on water at Toddington 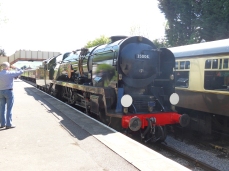 35006 running round its train at Toddington 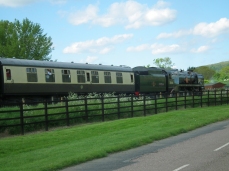 P&O Pulling away from Cheltenham

P&O at Toddington before the renaming ceremony

P&O at the signals at Toddington

The first opportunity the public have to ride behind 35006 is during the Cotswold Festival of Steam at the end of May. Thereafter she will enter normal service on the railway.

PS Any knowledgeable readers out there know what route the indicator discs are showing? I suspect it’s probably not Toddington to Cheltenham return…