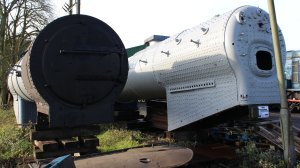 Tonight we are looking at the latest update from the Urie Loco Society, the group who own and are currently restoring two Urie S15’s 30499 & 30506 which are based on the Mid Hants Railway. I have been a member of the society for about 5 years now and almost joined them as a volunteer just before the chance to work on Canadian Pacific popped up. Who knows where LocoYard.com would be today if that had happened! Anyway in the latest blog post from the Urie the new chairman Mark goes into great detail about the work that has been happening with the Uries over the last 18 months. More information on the group and how you can support them as a member or as a volunteer can be found on there website http://www.urieloco.co.uk/.

18 months +; that’s how long it’s been since I last wrote a missive about the ULS! I really don’t know where that time has gone but I can only apologise and thank you for your patience in waiting for this next update.

The ULS hit the headlines late last year for all the wrong reasons, with reports appearing that around £27,000 had ‘disappeared’ from Society funds. I don’t intend to dwell on those stories, which were true, but I do have the pleasure of confirming that every last penny of the missing funds had been returned by early February. This has certainly helped make the early months of my tenure as Chairman much easier than I had expected. I would like to take this opportunity to extend sincere thanks from myself, the committee and our trustees for the support we received during this difficult time. We would especially like to pass on our gratitude to every person who sent in additional donations to help us through, this money will now all go into the funding gap which is 499’s boiler.

As far as the engineering progress is concerned, so much has been done that it’s not possible to list everything so I will focus on the key achievements:

The new front frame sections were successfully welded into place earlier on last year. Paul Stone is our coded welder and using a process known as flux-core welding (a form of mig rather than arc welding) he only needed 1 day per section. The centre casting provided the anchor points to effectively lock old and new sections together for welding. It has to be said that at first glance it looks like we have made a hash of the R/H side because the top of the new plate sits proud of the old; in fact it is sitting perfectly true. The old girl has obviously had a tough life including a few rough shunts, so much so that when we looked closely we realised the original frame on that side was bent downwards. Prior to the actual welding, all holes previously drilled using the old plates as templates were opened out to almost full size and countersunk as necessary. With both sides welded up, the centre casting was removed again for cleaning up and weld repair to wastage in some local areas. Work then went into abeyance for a number of months pending the return of the cylinder blocks from contractors Bryn Engineering. The blocks were eventually received back just before Christmas last year and have now both been trial fitted to the frames. They are not the easiest things to lift due to their shape so a special cradle was made to allow a 2-stage lift. First the block needs to be stood up, so bolt a heavy plate to the block, fix shackles chains and strops, lift block into the cradle, release chains and remove plate. Then, with the block upright in the cradle, lift it using strops only onto the frames and hold in place with accommodation bolts. Sounds easy as I sit typing, but believe me each time we do this is a very nerve-racking experience. All the fixings, chains and strops have to be in exactly the right place at equal tension…..if a block falls there will only be one outcome and it’s one we daren’t think about! All the bolt holes for both blocks lined up, so with a few weeks of reaming completed they have been put to one side to await the final fitting. The large platform which sits in front of the smokebox has been temporarily bolted onto the frames to check alignment although this has also been removed ahead of the final rebuild. The buffer beam is drilled and countersunk and the supporting brackets/angles which sit behind it have been fabricated. Most recently the centre casting has been removed yet again to be cleaned off and de-burred before we get stuck into riveting and bolting up.

An awful lot has been achieved in the period since I last put a missive together. The front end of the loco has been completely stripped down, removing pistons, valves, crossheads, slide bars, sand boxes, motion brackets and extension pieces from both sides. Both cylinder blocks have been removed and the great news here is that they are not in as bad a condition as 506’s so will not need to be sent away for specialist work. Once the blocks were off, we then ‘blew out’ all the rivets holding the centre casting in place, replacing some with accommodation bolts, and lastly both leading hornblocks were removed. The wasted frame sections were removed, taking the cut to roughly in line with the centre of the leading driving axle, some 14’ in length. 499’s frames had to be renewed further back than 506’s because of an old BR weld repair that had started to crack again. In fact, the R/H side was so bad that we were able to simply lift off the majority of the wasted section without any cutting; 499 had, in reality, broken her back. The new frame sections had arrived sometime prior from Tata Steel, cut and profiled but not drilled. They had also been joggled for us, a joggle being a kink in the frame necessary to accommodate the large cylinder blocks whilst keeping the locomotive in gauge. Using exactly the same methodology as we did for 506, the old frames were used as a drilling jig on the new before our specialist welder brought everything back together using the flux core process. It will soon be time to start rebuilding the loco.

Circumstances have unfortunately prevented me from providing more regular information about progress on our 2 S15’s. We’re out of the woods now so hopefully I can finally commit to doing what I regularly promise! Before then, however, the Urie Loco Society will be running an experimental open day at Ropley on June 18th. It’s an opportunity for us to re-engage with our members and others and hopefully give visitors a chance to get up close and personal with the engines, meet the team, discuss what we’ve been doing and see exactly what’s involved with a heavy overhaul and a full restoration. The boiler shop will be open and I am delighted to say we will be joined on the day by Andy Netherwood, MHR Boilershop Foreman, who will be available to answer any questions regarding 506’s boiler overhaul. Needless to say we will be opening our sales stand which has recently been restocked with 3 superb book collections generously donated to raise funds for the loco’s. If you can spare a couple of hours between 11am and 4pm why not come along and see us, we would love to talk with you.

Due to holidays, the next update won’t be posted until mid-July……here’s hoping I achieve my target!!!

Thank you for your interest