Upon a request for a picture of 6000 King George V on twitter, Nick Littlewood went way beyond the call of duty and sent in this fantastic selection of pictures that just had to be published!  Locoyard followers would do well to follow Nick  (@NickPLittlewood) on twitter; as he publishes a plethora of fascinating railway pictures, memorabilia and articles.  This is Nick’s second contribution – be sure to check out A Princess in Paddington too!

6000 King George is one of two GWR locomotives nominated into the final of the vote to find the most famous steam locomotive (voting now closed); the other being 3440/3717 City of Truro.  The King class of steam locomotive was the most powerful 4-6-0 type built in the UK; a claim to fame in it’s own right.  The type were built partly in response to to the Southern Railway’s Lord Nelson class that had previously taken away the GWR Castle class’ title of “most powerful express type”.

King George V was the first of 31 King class locomotive’s built by the GWR and was named after the then (1927) reigning monarch.  To help celebrate the Baltimore and Ohio Railroad (B&O) Centenary celebration’s; King George V was shipped to the USA.  It was there that it was fitted with it’s distinctive bell (see above) and plaque. 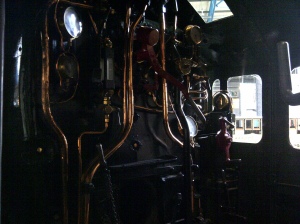 Although it is one of three members of the class to be preserved, it is the only one of the three to have it’s original unrestricted and not cut-down cab fittings.  So it can be said that it maintains the true look of the King’s and that it is the biggest too!

King George V is quite rightly a member of the National Railway Museum and can be seen on display in York; where Nick captured it so well in these pictures. 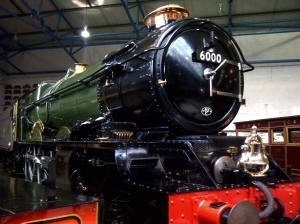 Thank you so much Nick for sending these pictures in!  Don’t forget, if you have a story, article or pictures that you would like to publish, you can do it here at Locoyard.com.  Please contact Locoyard if you do (click here!)