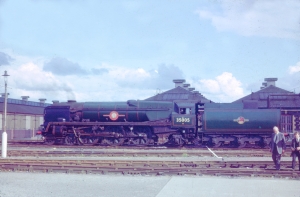 We start this diary entry with this lovely photo of 35005 by Alex ‘Mac’ McClymont. It shows Canadian Pacific in her rebuilt condition languishing in the sunshine on an Eastleigh open day in the early 1960s. She looks stunning and so she should,  having not long been in her rebuilt condition.  It’s great to know that she is currently being returned to steam only a few hundred meters away from where she stands in this photo.

John inspecting the work. His dedication to the project is amazing.

Work on Canadian Pacific is progressing nicely (apparently faster than expected) with work being focused again in the cab and the smokebox. The big news from the cab section is that the boiler cladding which I started taking off last week has all been removed.

So work has switched focus to the smokebox and the removal of the super heater elements from the boiler tubes. At the time of writing there was only one left in the boiler but at time of posting this should have been removed. The problem we had was that the last superheater element couldn’t be removed as the steam pipe for the left hand cylinder was in the way. This meant I spent my afternoon heating the nuts that attached the steam pipe to the support bracket so we could remove them. To be honest I was very glad to be doing this job as it was a miserable wet day in Eastleigh and the shed roof had so many leeks that I was glad to be in the dry! Eventuality all 5 nuts were removed after some swearing, lots of elbow grease and a cup of tea. The plan is to get the left hand cylinder steam pipe out on Tuesday (12th) as it is now loose and just waiting for the studs to cool down. This means that we could then remove the last superheater element from the boiler tubes. The middle cylinder and the right hand steam pipes have both had several of the nuts that attached them to the support bracket removed, so hopefully they will also be removed in the next week or so. 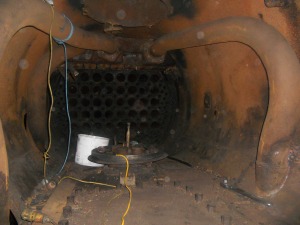 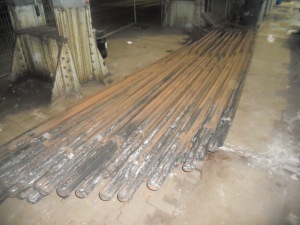 The pile of superheater elements.

I did mention last week that the smokebox was damaged and I finally got some photos to show its poor condition and the hole.

It doesn’t look too bad but the steal is so thin in places that if I put any weight on it I would go straight through it. Worryingly the corrosion seems to around the bottom bracket which means a whole new door might be needed.

I have got to admit that I have really enjoyed working on Canadian Pacific and have learnt so much that I just wish I had got involved a whole lot sooner. If you are thinking about getting involved in the railway scene, do it as it is the most fun you can have. The only downside is that it took 3 showers last night to get all the soot out of my hair and the fiancee got a good giggle out of it!

Progress is right on track (maybe even ahead of schedule) and is going wheely well (that’s the last of the train puns I promise), so to avoid putting the brakes (sorry I lied about the puns) on the project we still need your help funding the restoration. We are simply taking the locomotive apart at the moment and will not be able to begin work restoring her until funds have been secured. The cost of the boiler work alone is expected to exceed £100,000.00.  Any help you can give will be gratefully appreciated no matter how small you think it might be.

Don’t Forget to check out the Brookes Castle – Volunteer Diary to catch up on previous posts!