This weekend I was able to visit (abeit briefly) the South Hants Model Railway’s club 2014 show. It was so late in the day that they ran out of show guides which does make writing blog posts about the layouts a bit trickier! But up first we have my favourite layout from the show: 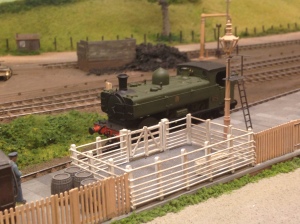 The Fareham Model Railway clubs standard finescale 4mm layout has now been to several exhibitions and apparently is still a work in progress. The P4 (18.83mm) layout depicts a busy fictitious seaside terminus located somewhere in the Torbay area, catering for both freight and passenger traffic. Although initially intended for running 1930s stock, there is nothing preventing earlier or later stock running, other than trying to keep in period and not pushing the degree of artistic license to its limits by mixing periods.

The layout is approx. 21 ft x 2 ft 6 in and consists of 4 off 4 ft boards plus a 5 ft long rotating fiddle yard. The layout is as light and compact as possible, whilst retaining stability, to make transportation and storage simple. The layout is run to a timetable which reflects the typical running the station would have received which adds an extra layer of realism to the layout. 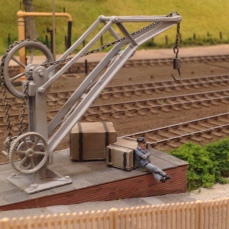 I have always been a big fan of pre-grouping GWR locos so seeing a brilliantly modelled Aberdare class loco was always going to be a big hit with me. The layout also had a couple nice little scenes which I enjoyed like the 2 guys unloading the coal wagon. 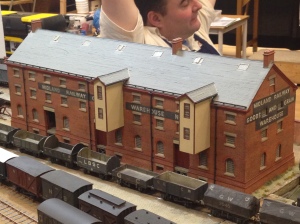 This layout is a rather special P4 layout built by Dave Barrett and is intended to show a small corner of the Midland railway Goods Station in Nottingham. The time period is set prior to 1923 but some alterations were made to suit the conditions of the competition.

The layout was originally intended as a diorama for photographing wagons etc. It has been extended to suit the project and to allow for shunting by means of a cassette type fiddle yard. One warehouse has had to be substituted by something less tall to allow the boards to be boxed together and carried in a car. One warehouse will be open at the side to demonstrate the loading and storage systems in use on the railway. The wagons/vans can be delivered to the sheds for unloading! loading and removed to sidings. It will be even better if someone comes up with a powered horse. 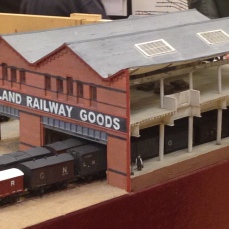 The layout had one working loco moving wagons around but the purpose of the layout is to show off the wagons rather than for operational train fun. The layout was something I enjoyed photographing as with the limited running the owner had created a few nice scenes such as the horse and cart, unloading of wagons and the barge being loaded up with timber.

Part 2 looking at some more great layouts at the show will be appearing soon, thanks for reading.