Continuing our summary of 2014 we look at Heritage Railway articles, of which there are lots, so make a cup of tea, coffee (or whatever you wish) and read on! 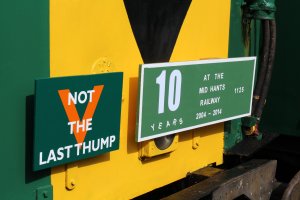 2014 was a year of many commemorations and anniversaries.  One such anniversary was the ten year anniversary of the “Last Thump” when the venerable class 205 Thumper DEMU was withdrawn from service. A number of heritage lines celebrated the ten years by running “Not the Last Thump.”  Generally I personally take most interest in steam locomotives, but my horizons are broadening and this particular class is one that I’m very fond of.  This is down to memories of the Hampshire Thumper units in service (click here to read more.)  The Watercress Line had it’s own “Not the Last Thump” event at the beginning of May, which was reported on here. 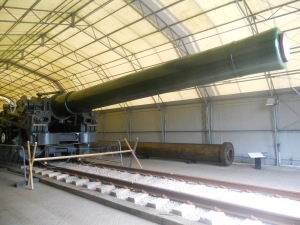 Perhaps the most significant commemorations of the year were D-Day and the beginning of the Great War. It was 70 years since D-Day and 100 years since the start of the First World War.  Railway’s were a vital strategic resource during war time and therefore it is not surprising that the relationship between rail and war was looked at throughout the year.  Simon started with looking at World War 2 Boat Plane Trains (click here to read.)  Jonathan published an article on incredible bravery on the railways – the Soham Railway Station Disaster (click here to read more.)  Simon’s article timed for Armistice Day – “At the going down of the sun” (click here to read) and was a fitting tribute to railways in wartime.

The Kent and East Sussex Railway (K&ESR) celebrated it’s fortieth anniversary of preservation with a steam gala in May (click here for the full report.)  On the subject of the K&ESR, a blog post that created quite some interest was one that looked at the line’s Norwegian tender engine no 376 (click here to read it.) 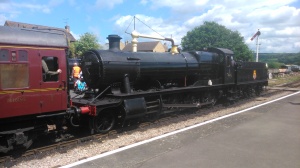 Of course, the K&ESR was one of several articles that covered steam gala’s on preserved railways.  Jonathan covered the North Norfolk Railway’s steam gala on video (click here,) whilst Shirl reported the West Somerset Railway’s Spring Steam gala (click here) and Autumn gala (click here.)  The gala with the greatest number of locomotives in steam reported in 2014 was also the arguably the smallest; the Eastleigh Lakeside Steam Railway Spring Steam Gala 2014 (click here to read more.)  Alex covered the Cotswold Festival of Steam (or “Back to Black” gala) on the GWSR (click here) whilst I was reporting from the K&ESR and Simon was at the Isle of Wight Steam railways gala (click here to read more.) 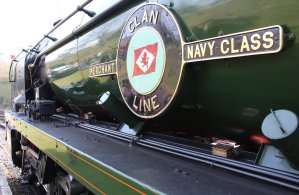 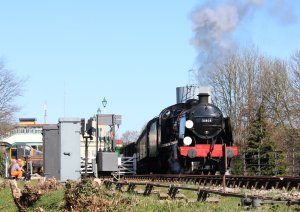 As regular readers know, the Watercress Line features regularly on this blog, it being the local heritage line of myself and Simon.  The Spring Steam gala was the first reported visit of 2014.  It was a fantastic event (click here to read the various linked blog posts.)  This was the final gala of U class 31806 which left the line for the Swanage Railway later in the year, but was captured a couple of times before it left (click here to read one of the last articles featuring 31806.)  The railway takes an active role in Alresford’s famous Watercress Festival (as reported here.)  Other nice visits were for the Autumn gala (as mentioned previously and also a festive themed visit during Santa Specials here. 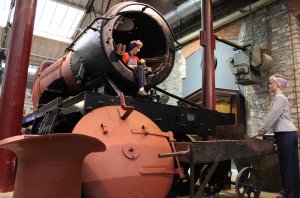 The first heritage railway article to be published in 2014 was a continuation of posts that had started in 2013 looking at STEAM – Museum of the Great Western Railway, Swindon.  The museum has a number of very special exhibits and is well worth checking out, click here to access all related blog posts.  Another summary of blog posts from 2013 was the roundup of articles from a visit to the National Railway Museum, York (click here.) 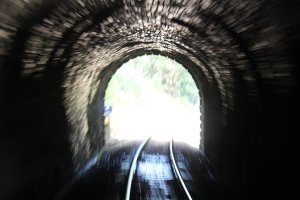 Continuing with articles from other heritage lines was a lovely visit to the Beautiful Bluebell Railway (click here) which was very special indeed.  Later in the year reports from Devon from the Dartmoor Railway (here,) South Devon Railway (here) and on the Paignton and Dartmouth Railway that included a ride in the Pullman Devon Belle Observation Car (click here.)  Shirl posted a different view of the Paignton line in a walk through Greenway Tunnel (click here.)  Further north and much later in November, a trip on Peak Rail was reported here.  Jonathan wrote an interesting article on the Nene Valley Railway Small Loco Group (click here,) a group who have an interesting collection of locomotives.  The Swanage Railway was visited too and this report covered a locomotive that would soon no longer be in service, 34028 Eddystone, due to withdrawal for overhaul (click here to read more.)  The last heritage visit of 2014 was on the Spa Valley Railway, which was very enjoyable (click here for more.) 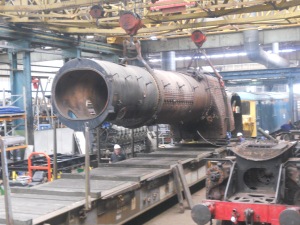 Simon, who is a volunteer working on Merchant Navy class 35005 Canadian Pacific (CanPac) continued reporting on progress and celebrated the first year of his volunteer diary (click here to read all volunteer diary entries.)  Not surprisingly Simon has fast become quite an expert on Bulleid’s Merchant Navy class and published articles looking at their history.  The first for 2014 was a look on the footplate of CanPac’s class mate, 35028 Clan Line (click here to read.)  Simon looked at CanPac’s history, starting with the Spam Can years (click here,) then moving on to the rebuild (click here) before finishing by looking at the preservation years (click here.)  He also published an excellent piece by Dave Wilson on the locomotive breaking a speed record (click here.) 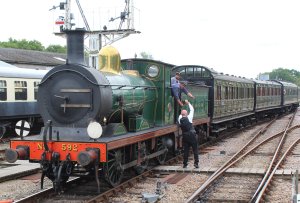 It is natural for a blog to cover mainly current events and news, but we are making efforts to recount history too.  Nick supplied some images of Sheffield Victoria station (click here to view) that was once an important part of the former Great Central mainline.  Another blast from the past was a piece on the beautiful but now extinct LBSCR K class 2-6-0 (click here for more) and another on the South Eastern and Chatham Railway L class 4-4-0 (click here to read.) 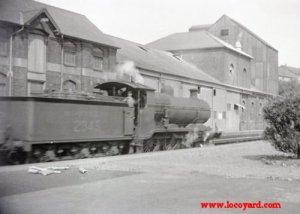 Other blog posts looking at locomotive classes include a look at the LSWR B4 class (read by clicking here.)  Shirl put together a fantastic and comprehensive article looking at GWR King class 6024 King Edward I (click here to read.) 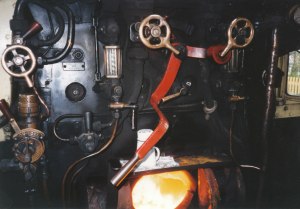 There have also been a number of first-hand accounts.  Firstly we have John Anthony who has provided plenty of stories from his experience as a locomotive driver (click here to go to his dedicated web page.)  Simon published some excellent pieces including Stories from the Atlantic Coast Express (click here and here.)

On a rare venture into lateral thinking, I also had a look around Eastleigh looking for heritage traction on the mainline.  This proved to be very productive (click here to read more.)  A little later in the month, Simon similarly found items of interest at Portsmouth’s Historic Dockyard (click here to read) plus some real fire power in this blog post! 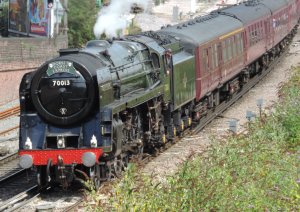 There have been several mainline reports, including The Royal Wessex on 5th July 2014 (here) and Oliver Cromwell on the Dorset Coast Express (click here) from Simon, the Torbay Express and The Royal Duchy from Shirl (here) and 44932 – Superb Stanier in the South Summer 2014 (here) from UK Heritage Hub.  A fabulous article published by UK Heritage Hub was on the West Highland Steam Express 2014, a fascinating article by Matt Evans (click here to read.) 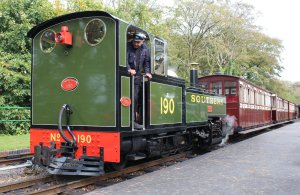 From the big rail to the very small, we published a report on the UK’s only 8 1/4 inch miniature railway; Bankside Miniature Railway (click here to read.)  Substantially bigger and indeed one of the biggest of preservation’s success stories is the Lynton and Barnstaple Railway at Woody Bay.  Click here to read about a delightful visit to the railway in North Devon. 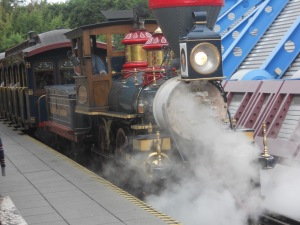 Railways can also be a place of great imagination, as Simon found out at Disneyland Paris (click here.) 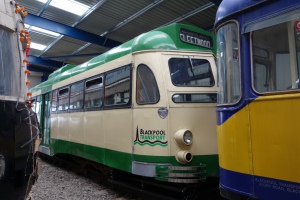 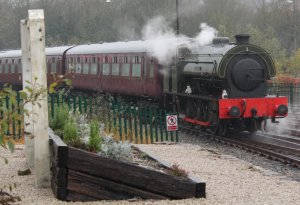 As you can see it was quite a year!  Hopefully 2015 will have much to offer too!