Tonight is part two of a series of blog posts (click here for part 1), showing some of the Model layouts that could be seen Solent Model Railway Group’s Exhibition held on the 23rd and 24 February 2013.

This layout is set on the border of Switzerland and Austria at fictitious terminus with rolling stock from both countries from multiple eras.

This modern (current) era narrow gauge layout represents Pinzgauer Lokalbahn in Austria.  With many details it is worth looking out for on the Model Railway Exhibition circuit.

Based on real building’s and scenes, this is a truly beautiful layout, set in Normandy, France. 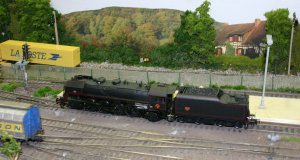 The final layout we look at today is also set in Normandy, France.  Although Torcy is a real place, the layout if fictitious with mainly diesel motive power and the odd steam special.

More Blog Posts will be published on the exhibition in due course.  As ever, watch this space!