Welcome to this mini series looking at Merchant Navy class locomotive Canadian Pacific. My recent blogs posting about her stripping down for costing and parts inspection has proved very popular and have taken the decision to write a mini series looking at her history. The first post will look at her life with spam can casing, the second as her time as a rebuild and the final part will look at life after withdrawal from BR service.

Part 1:
The Spam Can Years

On the 13th January 1942 a Malachite green monster emerged from Eastleigh works to enter service.  This was a new Merchant Navy class steam locomotive built for and by Southern Railway. Canadian Pacific was the fifth engine of order No. 1608 (Order 1608 was the provision to build the first 10 Merchant Navy’s) at Eastleigh Works and was fitted with boiler No. 1094 and tender No. 3115. She was taken into stock in December 1941 but not into actual traffic until January 1942.  Designed by Oliver Bulleid she was at the cutting edge of locomotive design and incorporated a host of new developments. The Merchant Navy class’ revolutionary design featured an all-steel welded boiler, chain-driven valve-gear, inside motion enclosed in an oil bath and ‘air-smoothed’ casing. They also featured a steam generator under the cab which powered the cab lights and headlights on the front which made them the earliest class of steam locomotive in the UK to be fully lit by electricity. This design also enabled easier fabrication of components during the austerity of the war and post-war economies. Unlike her earlier sisters her front end had been altered from that of the prototype to help reduce the difficulties caused by the exhaust beating down and obscuring the driver’s vision. The first five Merchant Navy’s were painted Malachite green and given a matt finish so as to obscure small irregularities in the casing but with the Second World War raging in the Spring of 1942 it was ordered all locos leaving works as well as new ones must be painted black. The new Southern Railway wartime livery, was an unlined unvarnished black with green-shaded “Sunshine” lettering. Running as 21C5 she was officially unveiled at a dedication ceremony in London’s Victoria station on the 27th March 1942 by Mr F.W. Mottley, the acting European Manager of the Merchant Navy shipping line the locomotive takes it name from – Canadian Pacific.

Bulleid also adopted the use of a new, unique numbering system for new locomotives.

5: Engine number (Canadian Pacific was the fifth of the Merchants to be built)

Canadian Pacific begun her working life at Exmouth Junction, in Devon hauling fast mainline expresses on the West of England Main Line to London.  On 4th May 1943 she headed the first regular sixteen-coach train out of Exeter Central to Salisbury and Waterloo. Before the second world war the Southern Railways traffic was 75% passenger and 25% freight but during the during the war roughly the same number of passengers as freight were carried and grew to 60% of total traffic. This increase of traffic meant it was not uncommon for Merchant Navy’s to be seen hauling freight and military trains.

It was the fast expresses where Canadian Pacific was best suited and after the war was over this became its primary duty. With peace time running’s returning to Britain’s railway the Southern Railway lost no time in reintroducing it’s most prestigious express services such as the Atlantic Coast Express (ACE). The Merchant Navy class would take the ACE between Waterloo and Exeter Central and then Bulleids lighter “West Country” and “Battle of Britain” class would take over for the branches beyond. The new locomotives enabled the introduction of a bigger, more reliable and faster train service. Peacetime also meant that in January 1946 Canadian Pacific was repainted into her Malachite green livery.

The ending of the Second World War had another consequence for Canadian Pacific and the Southern Railway as Clement Attle’s Labour Government created the Transport Act of 1947. This Act made the provision for the nationalisation of the network with all the “Big Four” railway companies coming together under the government controlled “British Railways”. Canadian Pacific was in Eastleigh works during the start of British Railways having a “general repair” which included getting a new Berkley mechanical stoker, flaman speed recorder, new steel firebox and the “S” prefix added to the front of the running number. This only lasted for a month before the British Railways number system was introduced and S21C5 became 35005. 1948 was a busy year on the railways and Canadian Pacific ended it at her new home in Nine Elms hauling the fast express services out of London Waterloo.

1949 saw British Railways decide to paint each of the regions “8P” express engines in a new “Express Blue” livery. With the Merchant Navy’s being classified 8P, Canadian Pacific found herself being painted in a third different livery in 4 years. The locomotive also had her cab modified and sent to Rugby locomotive testing station, returning to Nine Elms in mid-March. She went under further trials as she worked services from London to Salisbury with the LMR mobile testing unit. However disaster struck Canadian Pacific on 22nd September 1950 when hauling a Waterloo – Weymouth express. Approaching Woking she failed and had to be hauled by U class 31875 to Eastleigh works. The chain drive parted whilst traveling and completely destroyed the oil bath and the enclosed motion. The damage required a new right hand side cylinder and rods and took 6 weeks to repair. She left Eastleigh and returned to traffic with a new Malachite Green livery on 17th November 1950. The Berkley stoker was removed a year later when she was transferred back to Exmouth Junction.

The next couple of years Canadian Pacific proved to be a reliable and powerful running hauling express to London and then the return a few hours later. In February 1954 she was back in Eastleigh Works having a new boiler (1093) with resited safety values fitted as part of a “Light Casual repair” and repainted into the BR Green livery. Three months later it was decided to reduce her boiler pressure to 250lb sq when a new inside cylinder had to be installed due to cracks.

In May 1959, having covered 632,322 miles Canadian Pacific was sent to Eastleigh Works to have her “spam can” casing removed.  British Railways took the decision to rebuild the entire class to a more conventional design by R. G. Jarvis, adopting many features from the BR ‘Standard’ locomotive classes that had been introduced since 1950. Her life as a rebuilt will be the subject of part 2 of our look at the life of Canadian Pacific. 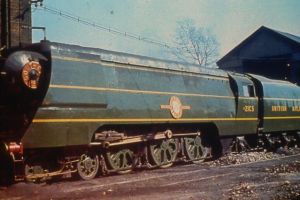 Just a little reminder that the Mid Hants Railway are currently stripping her down for assessment of works and costing in Eastleigh and before they can start restoring  her we need to raise the funds.  This is where we still need your help. As I have mentioned before the boiler work is alone expect to exceed £100,000 so anything you can give will be gratefully appreciated no matter how small you think it might be.

Don’t Forget to check out the Brookes Castle – Volunteer Diary to catch up on the stripping down of Canadian Pacific at Eastleigh Works.