Welcome to my final post in our mini series looking at Merchant Navy class locomotive Canadian Pacific. My recent blogs posting about her stripping down for costing and parts inspection has proved very popular and have taken the decision to write a mini series looking at her history. The first post looked at her life with spam can casing (click here) and the second one looked at her life in British Railways as a rebuild (click here). This final part will look at life after withdrawal from BR service. 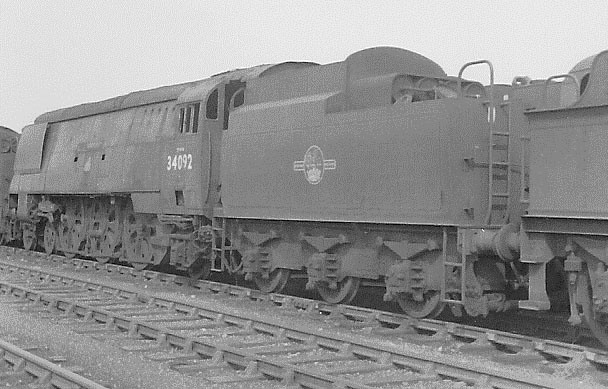 It was 7 years after 35005 Canadian Pacific arrived at Woodhams scrap yard in Barry, Wales that she was rescued by Steamtown, Carnforth. It was here that she begun the long road back to operation. However when Steamtown closed down in 1989, 35005 was sold to Andrew Naish who transferred her to the Great Central Railway. Her restoration continued and in November 1990 she was successfully restored to working condition and steamed for the first time in over 25 years. On the 23rd November, her first day back in traffic, she had a rededication ceremony with Andrew Naish’s wife Jenny unveiling CanPacs nameplate to signify her return to steam. She soon settled down to become a reliable member of the GCR resident steam fleet and put in some pretty memorable trips along the line including a double headed trip with Mid Hant’s 34051 Swanage in February 1993. Canadian Pacific made her first visit to the Mid Hants in July 1993 and left a lasting impression. She spent the next 6 years touring various heritage railways and museums across the country gaining a reputation as a smooth and reliable runner. Whilst visiting the Mid Hants Railway in 1996 Andrew Naish caused controversy by repainting Canadian Pacific into the short-lived British Railways Express Blue livery. Whilst the Merchant Navy class wore this livery they were in their original spam can condition and they never wore it in the rebuilt form. Soon after she was transferred to Tyseley for repairs to the firebox repairs and overhauled to mainline running condition. Canadian Pacific started her mainline career in 1998, still in her BR Express Blue livery and proved to be a reliable runner but was unpopular with many photographers due to her “incorrect” livery.

When she begun her mainline career she operated out of Tysley as the principal locomotive hauling the Shakespeare Express on various Sundays throughout the summer of 1999. Enthusiasts have said  Canadian Pacific’s younger sister Clan Line has a reputation for quiet and emission free running but CanPac showed she was far more showy with clouds of steam coming out of the chimney and a huge roar from her firebox.

Her finest achievements in her blue livery was on the Mayflower railtour in May 1999 when it ran from Bristol to Plymouth and return. The whole day was quite a tour de force for the engine. On the outbound she ran non-stop to a signal stop outside Exeter in 73 minutes with a remarkable minimum of 62 over Whiteball. West of Exeter she also demolished Dainton and Rattery banks with mins of 35 and 33 respectively, but the best was to come on the return. After a spirited dash to Exeter in 64 minutes including a check before arrival, she then ran non stop back to Bristol in 74 and a half minutes for the 76 miles and that included a slow entry from Parson Street due to a TSR and signals. Whiteball was taken at 64 with mile after mile covered at line speed over the Somerset Levels. A brilliant trip and shows what a mainline Merchant Navy can do.

CanPac began the next chapter of her working life a few years later when she was acquired by Marcus Robertson of Steam Dreams in January 2001. Canadian Pacific would go onto form the backbone of The Cathedrals Express trips being based at the Mid Hants Railway and repainted back to green. Amazingly from 2001 to 2002, 35005 made no less than 50 mainline trips for Steam Dreams. One of the highlights being a Cathedrals Express trip to Salisbury on 16th August 2001 where she really flew on the racing stretch between Basingstoke and Brookwood on the return trip. It was reported in various railway magazines that the pass-to-pass average for this section was 74.5mph

However on the 19th October 2002, disaster struck during a Cathedrals Express from London to Canterbury. Canadian Pacific had just made an unscheduled stop at Paddock Wood Station as a signalmen reported an oil leak from one of her coaches. Whilst at Paddock Wood one of her small tubes near the firebox crown burst which immediately filled the cab with steam. The crew leapt into action and quickly shut off the steam before they were forced to evacuate the cab. Even more bad luck occurred when the tours VIP guest, Richard Bowker from the Strategic Rail Authority, was scalded in the incident. The damage caused to the boiler in the incident meant that Canadian Pacific had to be withdrawn from service and spent two and a half years being repaired. It has been said that the locomotive was very lucky that she was stationary when the tube burst as if it happened when she was traveling at 70mph the result would have been far more serious. As a result of the accident she was confined to preserved railway operation with her being based at the Mid Hants for most of that time. In September 2005 she visited the Gloucestershire Warwickshire Railway for there steam gala weekend impressing the railway with both her running qualities and fuel efficiency but also offering a tantalising glimpse of what is to be on the Honeybourne Line when sister locomotive, 35006 Peninsular & Oriental SN Co enters service after its restoration at Toddington.

With 35005s boiler certificate quickly running out and due to the cost of restoring her to mainline standard, Steam Dreams made the decision to sell Canadian Pacific to the Mid Hants Railways in 2006 for a figure of around £300,000. Amazingly the locomotive was purchased outright without having to borrow any money from the bank as it was funded from MHRPS’s financial reserves, a generous legacy together with a £100,000 repayment of debentures by MHR plc. She spent several happy years working the Mid Hants line before boiler certificate expired in May 2008.

Canadian Pacific is back at Eastleigh Works where her story began all those years ago.  She is currently being stripped down and inspected before restoration can begin. Her overhaul is part of £1.5 million project which also sees the restoration of 2 Bulleid coaches and was awarded a grant by the Heritage Lottery Fund for £835,000 with the rest of the project being funded by the public..

Hopefully it wont be long before this beast is back in action.

To help the Mid Hants Railway carry on 35005 Canadian Pacifics story we  needyour help. As I have mentioned before the boiler work is alone expect to exceed £100,000 so anything you can give will be gratefully appreciated no matter how small you think it might be.

Don’t Forget to check out the Brookes Castle – Volunteer Diary to catch up on the stripping down of Canadian Pacific at Eastleigh Works.