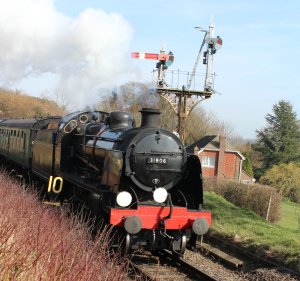 This U class locomotive was one of three Richard Maunsell design’s running at the Watercress Line Spring Steam Gala 2014 (the others being 850 Lord Nelson and schools class 925 Cheltenham).  The U class is a personal favourite engine type of mine and are a well-built design, a typical product of Maunsell.  This particular example wasn’t always so dependable though and started life as one of the ill-fated K class, the story of which has been looked at before on this blog.  It is a fascinating story and rather tragic, so click here to check it out.  Unfortunately for a Hampshire residents like myself, this gala was 31806’s last, as it will be moving to another (as yet undisclosed) railway later this year.31806 was rebuilt at Brighton works in 1928 as a U class, one of 50 that would eventually be built.  Versatile machines, they were nicknamed after submarines from the First World War, so you will often hear them referred to as U-Boats. 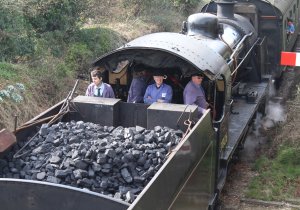 Interestingly, the British Railways (BR) livery is correct for this locomotive, as it was modified in 1957 by British Railways.  This is why it has a modified BR Standard 4 class chimney.  This U-Boat had a long career that ended in 1964 at Fratton, where it withdrawn and taken to the infamous Barry scrapyard, where fortunately for enthusiasts the vast majority of locomotives survived long enough to be purchased for preservation.

Restored to working order, 31806 first ran in preservation in 2011.  Having visited lots of preserved lines, the locomotive has established a good reputation around the country.  It will be missed by the Watercress Line when it leaves later this year for sure.  Thanks for reading folks 🙂