This Friday 7th to Sunday 8th September is an important weekend for the Southern steam enthusiast as it is the Watercress Line’s Autumn Steam Spectacular.  In antcipation of this; today we look at the planned steam locomotive line-up for the event, in order of build date.  UPDATED 4th September – S15 class 825 has been withdrawn and will be deputised by resident LMS “Black 5” 45379.

The oldest locomotive that will be in action is Didcot Railway Centre’s 43xx 5322, that replaced the previously announced 30777 Sir Lamiel after it was announced it was unable to attend. 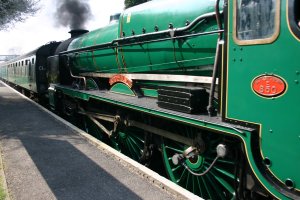 Currently a resident of the Watercress Line, 850 Lord Nelson is owned by the National Railway Museum.  This powerful 4 cylinder 4-6-0 is a unique survivor of its class.

CANCELLED – Unfortunately shortly after this blog post was published, it has been announced that this resident of the North Yorkshire Moors Railway will not be attending the gala.

Making its operating debut is the National Collection’s second representative – 925 Cheltenham.  This three cylinder locomotive will become a regular performer at the Watercress Line. 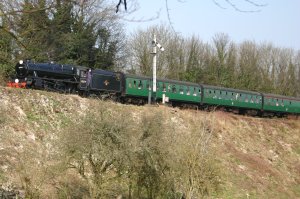 Long term resident 34007 Wadebridge will be the only working representative of engineer OVS Bulleid.

A Watercress Line resident, 9F 92212 has returned from loan to the Bluebell Railway; where she shall return.

Additionally two locomotives on static display will include resident Maunsell N class 31874 in wartime black livery and visiting 34051 Winston Churchill from the National Collection; both are pictured in action above.

Hopefully this has given you food for thought on what we can expect during the Watercress Line’s Autum Steam Spectacular in 2012.  During the forthcoming week we shall also look at last year’s Autumn steam gala, before this highly antcipated weekend gets under way.  So as usual, watch this space!