The third railroad I visited while I was in the United States of America was the Rio Grande Scenic Railroad.  After the fantastic trip on the day before, this was quite a different story. 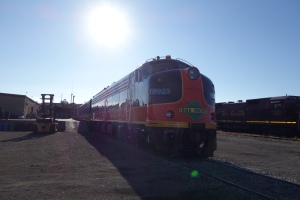 My family were visiting Alamosa to visit the wonderful Cumbres and Toltec Railroad, so we decided to visit this railroad as well. What a mistake that was. We started off at the ticket office when the woman struggled to find our tickets, thinking we were for the later concert train (more on that in a bit). After rummaging around for a while, she found them, and we proceeded to the platform.

All was well as we waited for our train to arrive. An attendant from the office came out to ask some passengers about their meal vouchers, an offer the railroad was putting on for our 3 hour journey, as a dining car was going to be on the train. (Please remember this for later)

On the leaflets, websites and other promotional materials, a smart diesel, in Rio Grande Colours, in expected to be pulling our train. It is even sitting in the yard. Instead, a 1970s diesel, in a dirty silver livery came pulling in, with three coaches. On this Grand train we were expecting something with more class, but instead, got a locomotive which looked like it had never been given any TLC. But, as any railway enthusiast would say, you can’t judge a locomotive by its looks so we got on. Coach 1066 please. But, hang on, the train in front of us did not have that coach, only 1068? We have first class tickets… 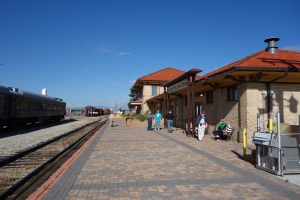 The car attendant said that it will be on the concert train later, but we said we have tickets for this train, to La Veta. He then realised that the office had not told the train staff what cars where going to be used, so he said come aboard and any problems with finding your seats, just ask, they should all be the same…

Well, our tickets were 1, 2 and 6, but seats 1 and 2 did not exist, even seat 6, which was next to a window was next to an aisle. So the train pulled out of the station in out quite dirty ‘First Class’ car. 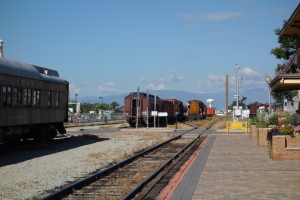 We decided to move to a different car, the seats were not comfortable. In one direction, was a really smart parlour car, and in the other direction, another, smart parlour car. We decided to head to the back of the train, where we could at least get some good pictures. So the car attendant, Matt, introduced us to the railroad and was happy to serve drinks to guests. One of the passengers asked about their meal tickets and when will they get on the buffet car, even though there is no buffet car on the train. He said it will be on the concert train, so there were no hot meals on the train itself. A disaster, especially as that customer had paid more money for that service. 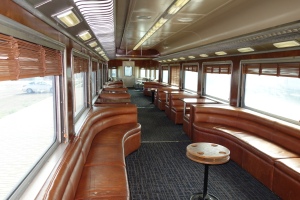 I think we should say we booked this train in February 2014, when it said online that seats were limited as the train was almost fully booked and the only tickets left was first class. It was quite a shock when the train was less than half full.

So, Matt tells us that all food and drink will be complimentary and snacks will be served, along with some Gumbo later on in the day. We travel very slowly on some flat grasslands, through a forest and up the mountain to La Veta, with Matt giving us stories, history and drinks. Some fruit and cakes were served and we were on our way. Nothing else could go wrong…

At La Veta, we had 1 hour to go around the town to have some lunch, even though we were promised one and a half hours. So lunch was rushed, in a small cafe that was struggling with the load of passengers that disembarked and needed refreshments. We then got back to the depot only to find out train was not there, but in the turning triangle, where it was turning around. So we waited, and waited, and waited some more as each individual car was turned around ready for the journey back. We got on and waited to go, and we continued to wait, for over 30 minutes. The train, due to its delay, had missed its slot and had to wait for the concert train to depart, so we continued to wait. 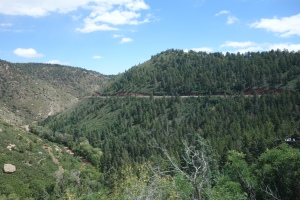 At 3.30 we departed and slowly traveled up the mountain.  We found out from our conductor that this area had been the site for a crash a few months ago when one of the freight wagons tipped on its side. Basically, the track was in poor condition and needed replacement. This problem delayed our train by an hour as we crawled along the track, going at just above walking speed. Snacks were served, cubes of cheese, crackers and some vegetables. The gumbo was served as well and was tasty, nice and warm, as the carriage was freezing.

Then, as we passed the concert site, we heard a bang and when one of the passengers discovered after going to the toilet in the other car (the ones in ours were not working) that the generator in our car was leaking fuel. So the conductor fixed it with a twig. Crisis averted. 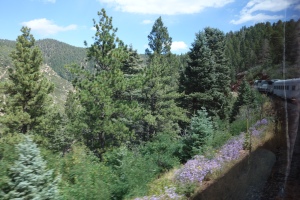 Then as we continued to travel along and wonder when this journey would ever end, a man with a guitar came in and started to play for us. A Titanic moment indeed.

At 7.00, then train arrived and customers disembarked for the ticket office to ask for a refund. The owner of the railroad was there as well, but he mostly ignored the criticism from the passengers. We discovered on the trip that he was a millionaire and had brought the train and the stock in the yard, so he was basically the Fat Controller without any knowledge of how to run a Railroad. 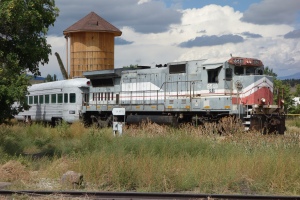 The entire trip was a shambles, and there seemed to be a lack of communication between the office staff and the train staff. Having a dining car on the train when dining car tickets were being sold is basic railroad logic, make sure you have the right carriages on the train when you are getting the train ready. The train turning around was unnecessary, as if it necessary to turn the train around due to wear of wheels, then that could have been done in the depot, they have the facilities there!

Also, people paid different prices for the same amenities, as no one knew where they were sitting. We, to this day, have no idea if we were sitting in first class or any of the other classes that they had on offer.

Despite all of the downfalls of the experience, the staff were excellent. Our train conductor was really polite and a joy to talk to and Matt was excellent as the train manager, as he helped with all of the confusion and gave us really interesting facts as well. The fellow passengers that we shared the car with was also extremely pleasant to talk to and many of them had visited the UK! One of the passengers, ironically, lived very close to where I come from! They made the journey much more enjoyable, and all of us could not believe what was happening! And finally, the gumbo was delicious.

Above is my video from the day, and below is some more photos from my eventful visit.