The second Railroad I visited was the Cumbres & Toltec Railroad, which runs from Antonito, Colorado, to Chama, New Mexico. This is one of the most spectacular railroads that I have ever travelled on, not only in the scenery, but also with how the day was organised by the railroad, and then the staff were some of the most helpful and knowledgeable that I have ever witnessed.

The railroad originally opened in 1880. It was part of the Denver and Rio Grande Railroad, built primarily to support the mining operations in the San Juan mountains, mainly around Durango and Silverton. It was a branch line and is now a heritage railway, which I visited in my holiday. By the late 1950s, the mining boom was dwinding, and oil was on the rise, so the railroad closed down. 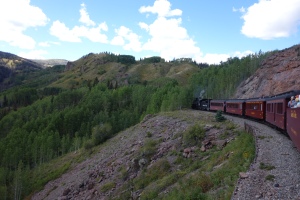 In 1970, the states of Colorado and New Mexico jointly purchased the portion of the line from Antonito, Colorado to Chama, New Mexico, along with much of the equipment that operated on the line previously. This section is the most scenic portion of the line, that loops back and forth between the two states. The Cumbres and Toltec Scenic Railroad Commission was created by an act of Congress as a bi-state entity to oversee the railroad.

My visit started at Antonito, where my family boarded the train. We were treated with a free drink of our choice, along with cake. Throughout the journey, we could walk to the open carriage, where panoramic pictures could be taken, as seen in my video. The sights are spectacular, and while the video gives you a sense of what you will see, it is breathtaking, especially when you are not restricted to view it through a window. Below is the journey from Antonito to Osier as stated in the official guidebook of the railroad.

Antonito (MP 280.70) is a small company town of the former railroad main line. It is home to the C&TS car shop, a water tank, and other relics. Most of the facilities were built by the Cumbres & Toltec, as the original rail yard, wye, and station were not sold to the states of Colorado and New Mexico.

Shortly after leaving the station, the train heads straight for 3 miles (4.8 km), until coming into some hills. Shortly thereafter, the train crosses Ferguson’s Trestle (MP 285.87), named after a man who was hung from a locomotive there. The original trestle was featured in the 1988 TV movie Where The Hell’s That Gold? starring Willie Nelson and Delta Burke. In filming, a planned explosion ended up getting out of hand and the bridge was burned down. Traffic was halted for a week while the C&TS built a temporary bridge. The following winter it rebuilt the trestle to match the original. About three miles (5 km) later, the train makes the first of 11 crossings into New Mexico and climbs a ledge up to a lava mesa. Lava (291.55) has the old water tank from Antonito which was moved here in 1971. The track goes around a horseshoe curve that is also used as a reversing loop to turn the rotary snow plow trains from Chama. The Cumbres and Toltec has two rotary snowplows, Rotary OM and Rotary OY.

Sublette is an abandoned railroad section camp consisting of a log bunk house, a section house, a siding and other buildings. There used to be a water tank at the western end of the siding, but today, in its place, is a standpipe. After filling the tender with water, the engine and the train slowly creep into lush aspen groves.

After departing Sublette comes Toltec Siding, which in the 50’s was the meeting place of long oil well pipe trains moving between Chama and Farmington to Alamosa. Shortly afterwards, trains pass through Mud Tunnel, which is unique because it is lined with wooden pillars since it is bored through soft volcanic ash. When the beams in the tunnel collapsed, the D&RGW made a “shoo fly” around the tunnel to allow passengers and small cars to be moved around the tunnel to an awaiting train. After passing through this, trains pass around Phantom Curve and through Calico Cut, and then the trains slow down as they enter the longer Rock Tunnel. Trains exit the tunnel, entering the Toltec Gorge, where the track is 600 ft (180 m) above the river. The line follows the river the remainder of the distance to Osier. 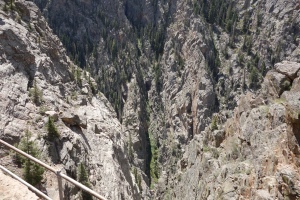 The half way point was at Osier, where every one of the passengers were treated to a two course meal, which was either meatloaf or turkey. The meal was probably one of the best I had on my holiday. As this was the middle of our journey, the train coming from Chama was also there, and viewed as well. After a stop for an hour, when you could look around at the valley. It was apart from this station and was almost desolate and the remainder of the mining that took place. Below is the route from Chama to Osier, again, from the official guide-book of the line. Please note that I travelled on the same train from Osier to Chama, but the guidebook only describes the journey in the opposite direction to what I experienced on my trip. 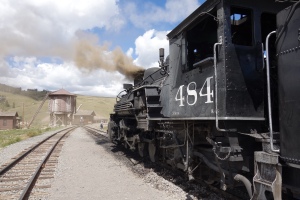 Beginning in Chama (Milepost 344.12), the railroad makes a nearly straight shot northeast after leaving the yard and crossing the Rio Chama (Rio Grande). About a mile later begins a 4% grade which is nearly constant from there to Cumbres. with the exception of a stretch at Coxo. The first siding on the line is located at Lobato (MP: 339.99), located here are the remnants of a stock pen and a water tank specifically made for a movie in the 1970s. The tank was used later in Indiana Jones and the Last Crusade. The water tank was knocked over in 2006, due to age and high winds. Just under a quarter of a mile away is Lobato Trestle, the second highest trestle on the line, built in 1883. Due to weight restrictions, only one locomotive at a time is allowed to cross; therefore, all double-headers must separate, and rejoin on the other side. On June 23, 2010, a big fire of unknown origin burned the Loboto Trestle destroying the wooden deck and railroad crossties. This fire also caused unrepairable damage to the bridge’s steel spans, requiring their replacement. Trains departed Cumbres instead of Chama for the rest of the 2010 season. Work to replace the bridge spans began in March 2011 and was finished in June 2011. The first passenger train over the bridge occurred on the morning on June 18, 2011.

From here to Cumbres the railroad operates on the north side of Wolf Creek. On the journey to the top at Cumbres, the train passes Cresco Siding and water tank (MP 335.10) and navigates to a small canyon past Hamilton’s Point. Exiting the canyon, the track makes a turn to the northwest and up the Wolf Creek drainage through Coxo. At a narrow point of the valley, the track makes a horseshoe turn up to Windy Point, which the train rounds to enter Cumbres Pass.

At Cumbres (MP 330.48), elevation 10,015 ft (3,053 m), is the Car Inspector’s House, Water Standpipe, remnants of the extensive snow shed and the Section House, which replaced the original depot after it was demolished in the 1950s. Cumbres is the highest point on the railroad. From here east, the track heads down at 2.5%, and descends the Cumbres Loop, more commonly refer to as “Tanglefoot Curve”. After exiting the loop, the track follows a general easterly direction until Milepost 327.6, where it turns north up the Los Pinos Valley.

Heading north, the track loses elevation, while the valley slopes up, with the track and valley floor finally meeting at Mile 325, where the track once again changes direction, heading south on the other side of the valley, following the Rio de Los Pinos toward Osier. After Mile 323, the track again leaves the valley, on a much steeper grade, while the track clings to the valley created by the river. Along the way, the track crosses Cascade Trestle (MP 319.95), taller than the Lobato Trestle, at 137 ft (42 m). Approximately a mile and a half later, the track enters Osier, Colorado, the midpoint of the railroad where the two trains meet for lunch. Here, riders may switch trains and return to their point of origin, or ride to the opposing terminus.

After arriving at Chama, a motor coach was there to take us back to Antonito, as the train I travelled on would be staying there in the night, before returning the next morning. The Cumbres and Toltec Railroad is the best railway I have ever travelled on in the USA, with not only having some of the most spectacular scenery that I have seen, but the historical importance and staff being first class. A must if you are in the United States, and certainly not to be missed.

Above is my video of the day, and below is more of the pictures of my visit. 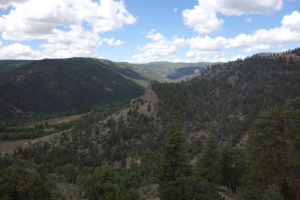 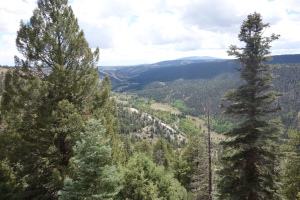 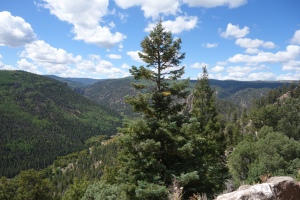 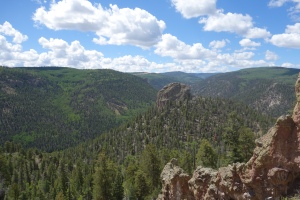 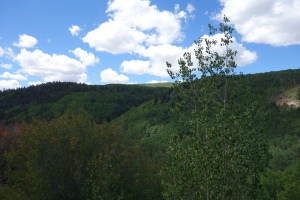 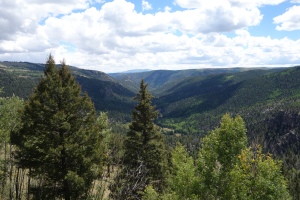 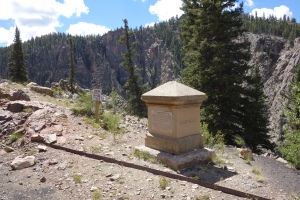 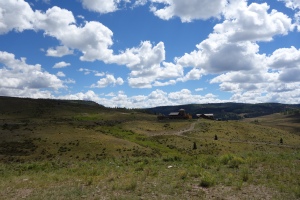 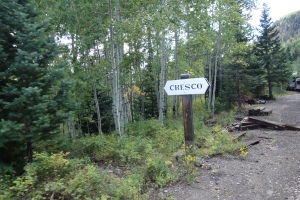 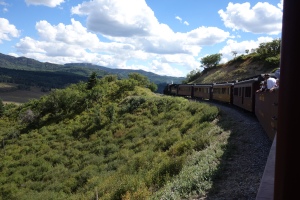 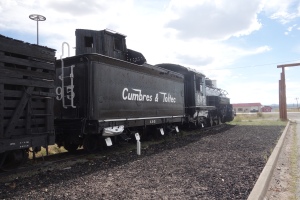 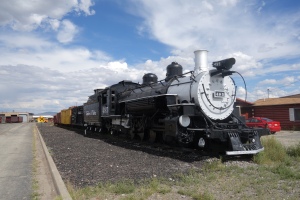 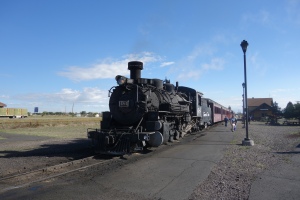 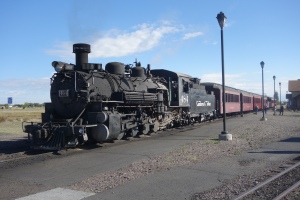