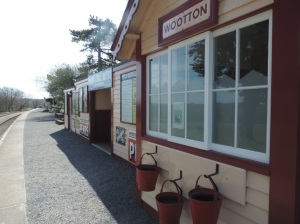 Today we are looking at the always lovely Wootton Station on the Isle of Wight Steam Railway. The station is the current western terminus of the railway that is unlikely to extended any further for the foreseeable future. The original station was located further west but that site had to be abandoned due to the unstable nature of the mainly clay ground – subsidence problems dogged this section of the railway throughout its existence. 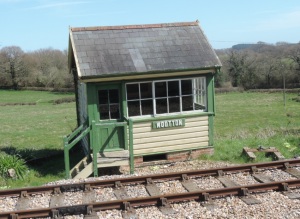 The station building is an accurate recreation of the Edwardian, turn of the century station that stood at Havenstreet. This carefully researched and constructed building was completed and opened in May 2012. It perfectly recreates a quiet country terminus of the Isle of Wight Central Railway era. Facilities include a waiting room, ticket office and toilets, one being fully accessible. Overlooking the station is a very pleasant picnic area. The newly updated station also had to involve extending both the platform, and headshunt to accommodate the Ivatt tank locomotives which will be entering service on the line soon.

Having reached its destination the train draws gently to a halt at the single platform, the engine drawing forward and then running around its train before coupling up for the return journey to Havenstreet and Smallbrook Junction.

The station is really lovely and captures the feel of the original, I spent 20 minutes in between trains at the stations and once the crowd boarded the train the scene became really timeless. I hoped you enjoyed this look at Wootton, will be looking at the Smallbrook Junction and Ashey stations in the near future to complete our look at the rather brilliant Isle of Wight steam railway.