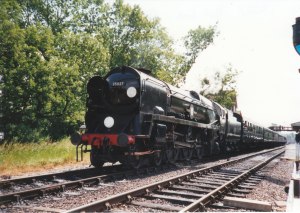 As the focus of my career moves into contributing to writing and telling the story of the oldest surviving Merchant Navy class locomotive, it has made me think about my own story of experiences with the type. My first siting of one of these 97.9 ton beasts left a lasting impression on me.  Long term readers of this blog may remember that my early experience of steam traction was on the Kent and East Sussex Railway, a light railway where tank engines are the usual order of the day.  So not surprisingly my first thought when I saw of one of these locomotives was that it was huge!  As far as British steam locomotives are concerned, the 8P rated Merchant Navy class are up there with the biggest and most powerful express steam traction.  Compared to a tank engine, the contrast was awe-inspiring, as you could imagine!

I was fourteen when I first “spotted” a Merchant Navy class, the example being 35027 Port Line at Sheffield Park station on the Bluebell Railway.  Port Line has long since left Sussex and is currently being overhauled at the East Lancashire Railway. In the 1990’s the Merchant Navy class, although magnificent, were a step too much for many preserved lines, including the Bluebell Railway. Their size being at odds with the passenger numbers on heritage lines. I think it is good to think that twenty years later, heritage lines have moved on to such an extent that they are less overkill and more useful due to increasing demands.

To see sights like this in southern territory again, we still have to raise another £605,000 for £1.5million CanPac project. The project will see not just the overhaul of 35005 Canadian Pacific but also 2 wooden Bulleid coaches. The boiler work alone is expected to exceed £100,000; so anything you can give will be gratefully appreciated, no matter how small you think it might be.