Friday, and I’m back at the same spot in Redhill, waiting for the replica Peppercorn A1 Pacific ‘Tornado’ to pass through.  It’s an interesting comparison to the Scotsman, and is a larger locomotive with a boiler that barely leaves room for chimney and dome.

60163 Tornado is a mainline steam locomotive built in Darlington, England.  Completed in 2008, Tornado was the first such locomotive built in the United Kingdom since Evening Star, the last steam locomotive built by British Railways in 1960.  It is the only example of an LNER Peppercorn Class A1 locomotive in existence, the entirety of the original production batch having been scrapped without preservation.  The locomotive’s namesake is the Panavia Tornado, a combat aircraft flown by the Royal Air Force.

And very impressive it is too….. 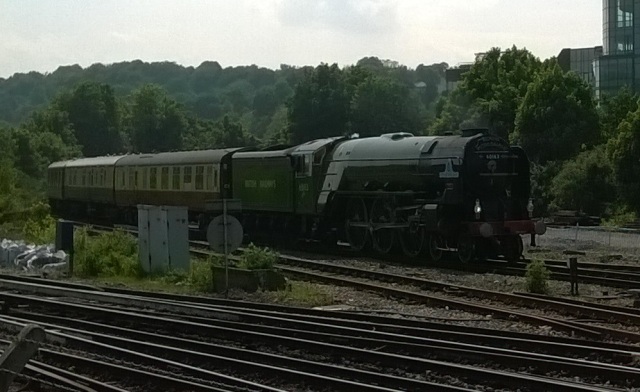 Behind was a long train of Pullmans and modified Mk1 coaches.  It was a long train, that was too long for Redhill station platform.  There must have been 14 coaches behind Tornado.

And most interesting – no back-up diesel at the end of the train.  Obviously Tornado, as a new build is considered more reliable that the venerable Flying Scotsman.

via A Tornado hits Redhill! — esngblog