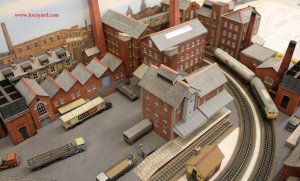 Although I had the pleasure of taking in the model railway exhibition, my wife and did not have enough time to see the rest of the extensive site.  That said, we did manage to squeeze in a nice cup of tea in Golden Arrow Pullman Car Orion, just the thing before setting off in the old car for a couple of hours!  Incidentally, the small station structure is named Beer Victoria Station in recognition of this Pullman carriage; that used to run from London Victoria station.

The idea of the model railway exhibition is as much to inspire and teach visitors about model railways as much as impressing with model layouts.  Demonstrations are regular and it’s worth looking at the Pecorama website if you are planning to visit to see what is happening on a given date.

As well as model railways there are other displays that include a small collection of Railwayana. 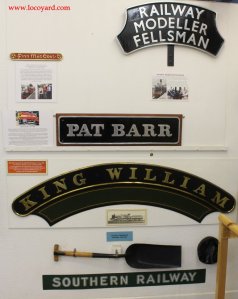 The exhibition is divided into sections, each one giving an idea for a possible location of a model railway layout.  Many pictures of these different parts of the model railway exhibition can be seen in the links below:

Pecorama’s Model Railway Exhibition has been around for some time now, but it is still well worth a visit, with plenty to see.  As mentioned before, there is much more on the site besides what has been shown here, with plenty to keep budding railway enthusiasts interested for a few hours!  It also has a large, well stocked model railway shop and is located in a beautiful part of the country.  It teaches, inspires and puts a smile on your face, so get’s top marks from http://www.locoyard.com!