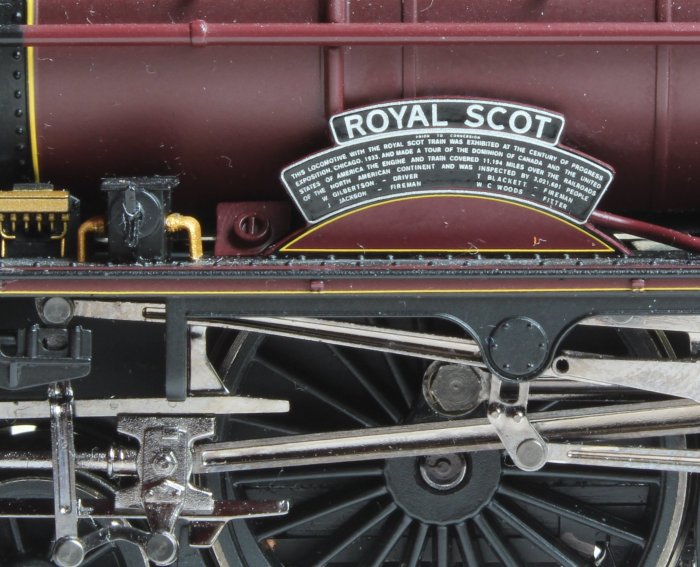 As is the tradition of this series of blog posts, we look at the history of the prototype behind a model from the locoyard collection.

6100 Royal Scot is a locomotive with a very interesting history that is complicated somewhat by the fact that 6100 Royal Scot is not actually the original Royal Scot.  We are not referring to it’s rebuild here – the original 6100 Royal Scot was the first of it’s class and built in 1927 by the North British Locomotive Company in Glasgow.  However, the engine modeled here and the one that survives started life as as 6152 The King’s Dragoon Guardsman and was built in 1930 in Derby.  The two locomotives swapped identity in 1933, prior to the locomotive being sent to sent to Chicago and the Century of Progress Exposition.  The identities were never swapped back.

When originally built, the class were very different machine’s to the one modeled here.  Designed by Henry Fowler, they were parallel-boilered and shared some similarities to Southern Railway’s Lord Nelson class – particularly the large Belpaire firebox.  This was due to the Southern Railway sharing their drawings of their class with the LMS.  Unlike the Southern machine, the Royal Scot class had three rather than four cylinders, but were none-the-less powerful machines that were successful.

After it’s time in Chicago, 6100 Royal Scot then toured the Dominion of Canada and the United States of America, covering some 11,194 miles and inspected by 3,021,601 people, as can be seen by the nameplate at the top of this blog post.  6100 Royal Scot gained a bell from this visit, making it easy to recognise against classmates. 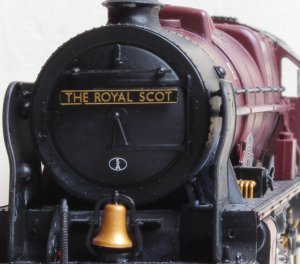 By the 1940’s the class were approaching life-expiration and rather than withdraw or replace parts with those as-built; William Stanier (then Chief Mechanical Engineer of the LMS) took the opportunity to rebuild the class – significantly so.  New (taper) boilers, frames, cylinders, smokeboxes and fireboxes were fitted to the class from 1942; creating the Royal Scot class modeled here and since preserved.  6100 was rebuilt in 1948 when the railways were nationalised and became 46100.  This does mean that this model is historically inaccurate – 6100 Royal Scot never ran in LMS Maroon in service, only BR Green.  This model reflects the colour scheme worn in preservation.

At the beginning of British Railways, Royal Scot was based in North West London (Camden) and served until withdrawal in 1965, at which time the locomotive was based at Carlisle Kingmoor.  Fortunately, 6100 Royal Scot survived the Beeching Axe and was purchased by Billy Butlin for display at Skegness Butlins Holiday camp.  It left in 1971 and moved to Bressingham Steam Museum where it was returned to working order a year later.  It ran until 1978 and was then kept on display, eventually being sold by Butlins in 1989. 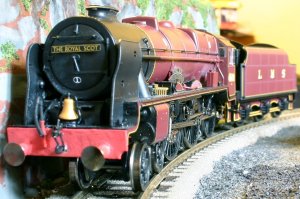 Restoration back to working order started in 2004 and eventually completed in 2009.  Unfortunately it’s stint in running order was cut short by a fire starting on a low-loader carrying 6100 to the West Somerset Railway.  In 2009 6100 was sold as Bressingham, who were unable to finance the required repairs.  It was bought by the Royal Scot Locomotive and General Trust (founded by Jeremy Hosking) and moved to Pete Waterman’s LNWR Heritage workshops in Crewe for major repair.  We very much look forward to these repairs being completed and seeing this magnificent machine in action again. 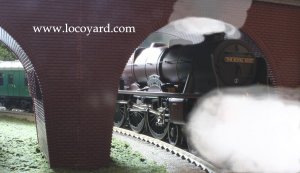 Don’t forget the history of many other locomotive prototypes of the locoyard model fleet can be found by clicking on the “Prototype Info” links on the Loco Models page (click here for more).  Thanks for reading 🙂

Error: Twitter did not respond. Please wait a few minutes and refresh this page.