On the 2nd June 1944, the small market town of Soham was awaken by an almighty bang. The case of this was a ammunition train, coming through the town. The story in the video above is told by my grandfather, who lived though the experience, remembers the night well.

This story is similar to many across the country, and many of our relatives are known to have these special stories to the Second World War.

What makes this story special, is that, the Driver and Fireman prevented a tragedy to the town. As my grandfather said, if the Fireman had not seen the wagon behind that the steam locomotive was on fire, then this would have been a far worse event, and the town would never have survived.

My grandfather kept all the over newspapers that mentioned the explosion, and two years ago, he handed them to me to keep and preserve, due to their historical value, many of them are over 70 years old. I also have the official book of the disaster, which is where the information below is from.

At 12.15 a.m. on 2 June 1944 a heavy freight train left Whitemoor marshalling yard, near March in Cambridgeshire. The train comprised WD Austerity 2-8-0 engine number W.D 7337, 51 wagons and brake van heading for Ipswich. The cargo on the train consisted of 44 wagons containing a total weight of 400 tons of bombs and a further 7 wagons containing other components such as tail fins. On board the engine were 41 year old driver Benjamin Gimbert and 22 year old fireman James Nightall, along with Herbert Clarke, train guard.

About 90 minutes later the train was approaching Soham station when the driver looked back to see flames coming from the leading wagon which contained 44 500 pounds (227 kg) general purpose bombs, with a total weight of 9 tons 16 cwt (22,000 lb or 10.0 t). Gimbert brought the train to a stop and, rather than running for safety, instructed Nightall to uncouple the first wagon from the rest of the train. Nightall managed this quickly although the fire was now quite serious. Gimbert started to draw the wagon away and had moved it about 140 yards (128 m) and was still alongside the platforms at Soham station when the bombs went off. A much more severe explosion was averted by the men’s actions.

The resulting blast killed Nightall immediately and signalman Frank Bridges, who was on the opposite platform, died the next day. Driver Gimbert, though he was badly injured, he survived, and Guard Clarke although stunned by the blast and suffering from shock managed to walk to the next signal box to warn the signalman there what had happened. Apart from these four men, five others suffered severe injuries and another 22 minor injuries. The explosion created a crater 66 feet (20.1 m) in diameter and 15 feet (4.6 m) deep, the station buildings were almost demolished and there was damage severe or moderate to over 700 properties within 900 yards (823 m).

Despite the severity of the explosion, emergency repairs meant that the line was open to freight traffic within eighteen hours and passenger traffic resumed the next day. 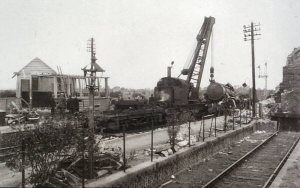 The cause of the fire was never fully explained. The wagon had previously been used to carry a load of bulk sulphur powder and although it would have been cleaned in between loads, the possibility remained that some of the powder remained. Although the wagon was sheeted, the theory advanced was that a cinder from the engine had landed in the wagon and had ignited some sulphur which in turn set alight the wooden body of the wagon.

Although this was still a sizeable explosion the effect and damage was little compared to what would have happened if the entire train load of bombs had exploded. The conduct of the driver and fireman in attempting, and succeeding, in reducing the result of the incident was recognised by the award in July 1944 of the George Cross to both men. The citation for the awards reads; 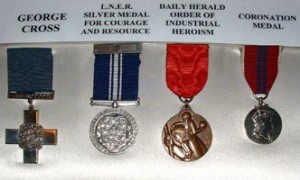 ‘As an ammunition train was pulling into a station in Cambridgeshire, the driver, Gimbert, discovered that the wagon next to the engine was on fire. He immediately drew Nightall’s attention to the fire and brought the train to a standstill. By the time the train had stopped the whole of the truck was enveloped in flames and, realising the danger, the driver instructed the fireman to try to uncouple the truck immediately behind the blazing vehicle. Without the slightest hesitation Nightall, although he knew that the truck contained explosives, uncoupled the vehicle and rejoined his driver on the footplate.’

‘The blazing van was close to the station buildings and was obviously liable to endanger life in the village. The driver and fireman realised that it was essential to separate the truck from the remainder of the train and run it into the open. Driver Gimbert set the engine in motion and as he approached a signal box he warned the signalman to stop any trains which were likely to be involved and indicated what he intended to do. Almost immediately the vehicle blew up. Nightall was killed and Gimbert was very severely injured.’

‘Gimbert and Nightall were fully aware of the contents of the wagon which was on fire and displayed outstanding courage and resource in endeavouring to isolate it. When they discovered that the wagon was on fire they could easily have left the train and sought shelter, but realising that if they did not remove the burning vehicle the whole of the train, which consisted of 51 wagons of explosives, would have blown up, they risked their lives in order to minimise the effect of the fire. There is no doubt that if the whole train had been involved, as it would have been but for the gallant action of the men concerned, there would have been serious loss of life and property.’

A permanent memorial was unveiled on Saturday 2 June 2007 by HRH Prince Richard, Duke of Gloucester followed by a service in St. Andrew’s Church, Soham. The memorial is constructed of Portland Stone with a bronze inlay depicting interpretive artwork of the damaged train as well as text detailing the incident. 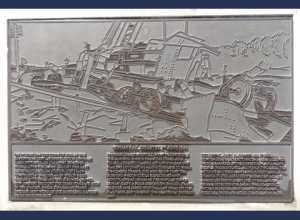 Both Gimbert and Nightall had Class 47 locomotives named after them, although the nameplates have since been transferred to Class 66 locomotives.,[4] although 47579 also retains its name in preservation.

In the video above, my grandfather explains what he experienced that night and the aftermath of the disaster.

Today, there is a memorial service to commemorate the brave victims of the disaster, and 80 years on, the story is still being told, and I expect it will continue to be a tale that many of future generations will learn about.

Over time, the story has become less well known, as evident by my Primary School teachers as none had ever heard about this. It is however a story that I will continue to tell as it changed Soham and it is very safe to say that I am a part of history. This is a very Back to the Future esque tale, as without the brave locomotive crew and station staff, Soham would have been destroyed, and my grandfather would have died, and thus, I would not be here sharing this story. All though the story would have had more wide spread coverage, the tale inspires people who hear of how they risked their lives to save an ordinary town.