The publishing of this blog post has been deliberately timed to coincide with Remembrance Sunday.  Model of the Week blog posts chart the history of the prototype and our featured locomotive is of War Department and later Longmoor Military Railway origin and most significantly a locomotive involved in one of the greatest acts of bravery and sacrifice in railway history.The 8F Austerity class were designed specifically for wartime.  Based on Stanier’s 8F 2-8-0, the Austerity 8F was a cheaper-to-build version designed by Riddles, who had been appointed Director of Transport Equipment at the Ministry of Supply during World War Two.  The main difference to Stanier’s locomotive was the parallel boiler with round-topped firebox.  This locomotive was one of an incredible number of 935 to be built from 1943 to 1945.  It is important that we point out that the livery of these locomotives wore in wartime was black – the colours as portrayed here were from the locomotive’s final days on the Longmoor Military Railway.

Before the Normandy landings of D-Day, the Army had little use of the class and as a result they were loaned to the railway companies.  After D Day they were shipped to the continent.  This locomotive was built at North British Locomotive Company, Glasgow in July 1943 and was works number 25205.  The War Department numbered the locomotive 7337 and it was put to work hauling heavy goods trains.

On 2nd June 1944, 7337 was hauling a consignment 51 wagons, 46 of which were laden with bombs amounting to about 400 tons.  As it approached Soham, the train’s driver; Benjamin Gimbert, noticed that the first wagon had caught fire.  Slowly bringing the train to a halt with the aid of the Guard Herbert Clarke, the Fireman James Nightall got out and uncoupled the first wagon from the remainder of the train.  Herbert had run forward to help, but by the time he had got to the front of the train, Jim had returned to the footplate.  Ben and Jim sped 7337 away with the wagon blazing attached to the locomotive.  Jim slowed the train to warn the signalman Frank Bridges, who had already halted a mail train and requested a locomotive to pick up the other wagons.  It was then that the explosion happened. Jim the Fireman was killed instantly and Frank the signalman was fatally injured by the massive blast.  Remarkably Ben, the Driver,  survived after being thrown 200 yards.  Herbert (the Guard) was thrown some eighty feet away, but also survived.

If it wasn’t for the actions of these four brave men, there is little doubt that Soham with all it’s inhabitants would have been killed and destroyed.  These four men risked (and two of them lost) their lives to prevent this from happening.  The Driver Benjamin Gimbert and Fireman James Nightall were both awarded the George Cross, the highest award for bravery that can be given to civilians.  I urge you to visit Soham’s website and read the full details of what happened (click here), I assure you that you will find it very moving.

So what happened to our locomotive, I hear you ask?  During World War Two, nothing went to waste and remarkably (considering the extent of the explosion) by September 7337 had been rebuilt with a new boiler, cab and tender.  7337 had been renumbered 77337 in August 1944 and after being rebuilt spent the remainder of the War in Lille, France.  Returning to the UK in 1946, 77337 was put into storage by the Southern Railway at Richborough, Kent. Although the locomotive had a brief foray onto the Longmoor Military Railway in Hampshire in 1943, it returned to stay in 1949, when it was selected to take the name Sir Guy Williams.  This name had originally been carried by classmate WD78762 and named by Sir Guy Williams in person in Germany, 1947.  Sir Guy Williams was the Chief Royal Engineer.

77337 did not become 400 Sir Guy Williams until the early 1950’s, after being overhauled at Swindon.  During the 1950’s 400 was converted as an oil burner for some time.  It was used for driver training until 1965, when it was withdrawn and used to train fitters.  In 1966 400 Sir Guy Williams was stored outside until sold for scrap in 1967.  It was cut up by John Cashmore Ltd of South Wales.  Being a locomotive with such an incredible history, it is a real shame that it wasn’t selected for preservation.  In fact, only one of this 935 strong class survived and this was only because it had escaped to Sweden.  It now runs on the Keighly and Worth Valley as 90733.

The Bachmann model is a decent performer (click here for the review) that now comes either DCC Ready or Fitted.  Don’t forget the history of many other locomotive prototypes of the locoyard model fleet can be found by clicking on the “Prototype Info” links on the Loco Models page (click here for more).  Thanks for reading! 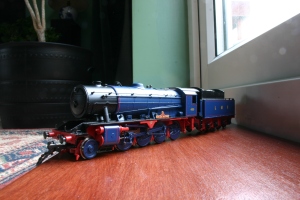