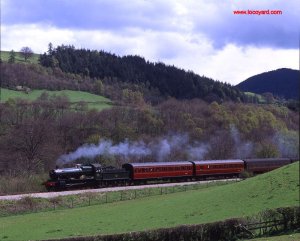 Hopefully the title of this blog post isn’t too misleading… The foxy lady in today’s blog post is a steam engine – British Railways built Collett Manor class 7822 Foxcote Manor.  Yes as usual, the subject matter is hot and steamy!  Although in this case, the problem is that this star of the Llangollen railway is not hot and can not be steamed at present, which is where it needs some help.

7822 Foxcote Manor spent its short mainline career working on Cambrian Line’s, something it has in common with many other members of its class.  It is quite fitting therefore that it is now based in Wales.  7822 owes it’s existence to Dai Woodhams scrapyard, Barry, South Wales from where it was rescued in 1972.  First run in preservation in the late 1980’s, 7822 became a regular on the Llangollen Railway.  These pictures were taken by the late Basil Roberts in 1996 during its first stint of running before withdrawal for overhaul. 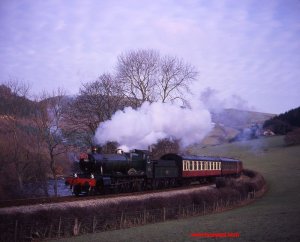 Overhaul was completed in just one year, with Foxy running another 10 year stint until withdrawal for overhaul again.  Unfortunately the locomotive’s third period of operation was ended prematurely due to unexpected boiler repairs.  7822 is set to return to service soon with a fresh ten year boiler certificate, but to achieve this the Foxcote Manor Society (www.foxcotemanorsociety.co.uk) would appreciate any support you can give.  And who wouldn’t want to support this foxy lady?!  Helping does not necessarily requiring you to part with any more cash than you would anyway as the society have signed up to Easy Fundraising (click here.)  Other charities and societies have done the same, to find out more about how Easy Fundraising works, please check out Simon’s blog post (here) that he published last year.

To read more about 7822, please check out the society’s website – www.foxcotemanorsociety.co.uk