The Paignton and Dartmouth Railway is set in one of the most stunning settings of any heritage railway in the UK.  Running from the seaside resort of Paignton, the line climbs through woodland, through Greenway tunnel to the Dart Estuary, terminating in Kingswear, where we see the giant Great Western Tank Engine, aptly named Goliath. 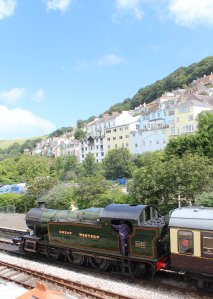 Kingswear is a small but very colourful town that is on the opposite side of the River Dart from Dartmouth; which is bigger and also very picturesque.  Dartmouth is dominated by the big Naval College building, that can be seen in the background of the picture below.

The massive locomotive in service was designed to haul coal in the welsh valleys.  It is a very powerful machine and made light work of this seven coach tourist-laden train.

5239 was built in 1924 in Swindon.  Weighing in at 82 tons, such a locomotive must have had a reasonable scrap value, but fortunately it escaped scrapping.  One of the ex-Barry scrapyard locomotives, 5239 was rescued and brought to Devon in 1973.  In those days the Dart Valley Railway (now the South Devon Railway) and Paignton and Dartmouth Railway were one organisation.  It is no surprise that 5239 ended up in Paignton – it’s weight would have been prohibitive on the Buckfastleigh line.  Restoration was completed in 1978 – a quick turnaround and it has been a regular runner in the fleet ever since.

5239 brings back lots of childhood memories for me, as I regularly saw the locomotive run during holidays in Devon.  It was good to see this beast again, still proving to be a Giant of Steam. 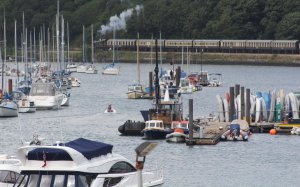 2 thoughts on “A Giant In A Beautiful Land”