As promised previously, here is the DCC fitting guide for non-DCC Ready Bachmann Austerity.  Note that planned future releases of this model will be fitted with a 21 pin socket for easier conversion.  However, the model has been available for some time without a DCC socket and previous releases include limited editions such as my version of Longmoor Military Railway’s number 400 Sir Guy Williams and the only preserved example – Keighley and Worth Valley Railway‘s 90733 Remembrance.  If you acquire any of these numerous versions and need to run it on DCC, this guide should help.

Note – Step A can also be used as a means to access the motor for adding a tiny drop of oil to the gears.

Three screws need to be unscrewed from underneath the model: 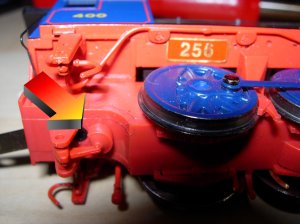 Under the cab – remove the brake pipework first and be careful as the loco-tender connection will fall out.

In the centre of the chassis 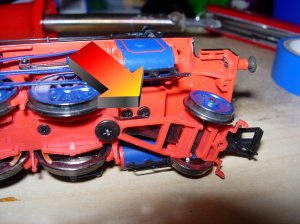 Under the front bogey (remove bogey first – see below)

Remove the cab handrails from the loco body: 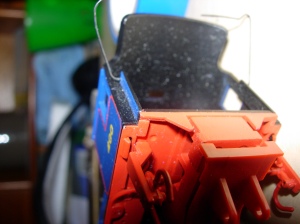 Push fitting links on footplate down to unclip chassis:

Clips have been pushed down

Step B – Soldering and DCC Fitting

You will need to choose a DCC decoder as space in the body is tight.  I choose a Hornby R8249 as a cheaper option – you have to be very careful using this chip as the wires can be pulled off the decoder very easily. 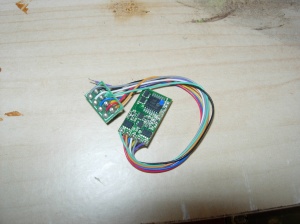 Remove the 8-pin plug from the decoder by cutting the cables, leaving enough cable length from the decoder.  Cut back the wires not required, leaving the black, red, orange grey wires that have to be trimmed back to expose the wire.

Soldering is the relatively easy bit (that said, being self-taught I’m very slow at doing it!)  Follow the rule red and black to the track, orange and grey the other way and you can’t go too wrong.  The wires come away from the top circuit board by unsoldering the connections.  I also unsoldered the  capacitor from the board and kept the blank board fitted for structural integrity of the motor housing.

Test that the loco works.  Be careful as removing the screws can pull the motor gears apart.  I found I had to re-screw the chassis screws in for testing.  Once you are happy, insulate the wires and carefully fit the chassis back together again.

Play with your DCC fitted train!