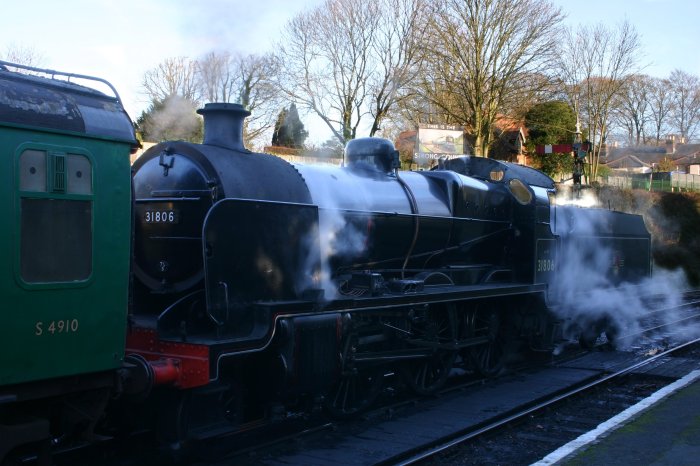 U class 31806 has been hard at work throughout December on the Watercress Line, hauling Santa Specials from Alresford to Medstead and Four Marks.

It’s incredible to think that some 84 years after it was (re-) constructed, this locomotive would be of considerable interest to all generations. 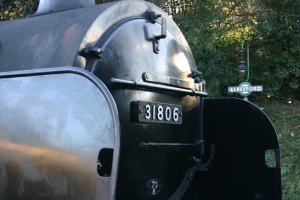 This locomotive started it’s life before 1928 looking rather different.  It used to be a K class 2-6-4 Tank engine, but was rebuilt following the Sevenoaks rail crash (1927) into a U class mogul (2-6-0), which cured the problems of very poor riding.

Hauling a rake of six, full, fully booked BR mark one carriages over the heavy gradient from Alresford to Medstead and Four Marks presents a challenge for the locomotive and crew, which apart from the loud chuff-chuffing of the steam engine goes largely unknown to many of the train’s passengers, who are fairly per-occupied by Santa, presents and mince pies!

The locomotive is country-facing and for this reason the gradient is tackled tender-first.

Nicknamed the “Alps, the final stretch from Ropley to Medstead and Four Mark’s is a straight one in sixty gradient. 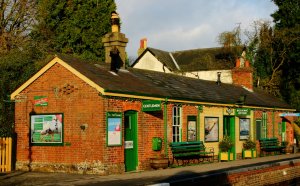 31806 could be heard long before arriving at Medstead and Four Marks, giving plenty of notice to get a snap of the booking office before it arrived! 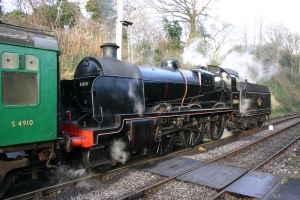 Usually the locomotive would then drift down to Alton, but during the Christmas period the U-class hauled service terminates here.

Another Santa Special service operates from Alton to Ropley during the same period (except for the first weekend of December) – each service can only be joined at either Alresford or Alton; with each seat pre-booked.

After turning around it’s train, the U class then returns to Alresford, smokebox forward this time.

The last services of festive period operate just before and after dusk and this really adds to the atmosphere! 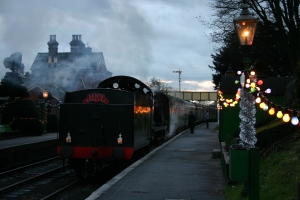 We finish the set of pictures at Ropley with the final return train of the day from Alresford. 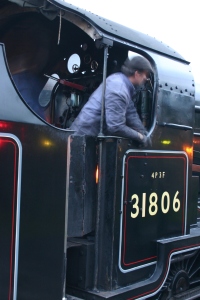 I hope you’ve enjoyed this set of pictures that may have given you some idea’s for the photo competition!

Do not forget to send in Locoyard’s Christmas photo competition!  Click here for more details.