On Monday a competition was announced for member of Facebook page Model Railway Blogs to find people’s most loved model loco (note – this competition is now closed) and today we announce Locoyard’s favourite!

This was never going to be an easy choice.  Some model’s I love due to their fabulous looks (such as the Hornby T9 or M7), others for their performance (such as Bachmann’s Fairburn 4MT or 9F) and others for both; such Bachmann’s C class or Hornby’s N15.  There are other models I love because of the work I’ve done to them, such as the modified Hornby E2 class, pug, terrier tank engines and Railroad 9F Evening Star.  Other models being glamorous prototypes such as Bachmann’s Tornado, City of Truro or Hornby’s Flying Scotsman are also fond members of the model collection.

In the end, I went for the model that I usually describe as my flagship – 850 Lord Nelson.  And why?  Well, for starters, I regularly see this locomotive in action on the Watercress Line – check out the Steam Diary for numerous examples of this! The real thing is a large four-cylinder beast, that until the GWR King class came along was the most powerful 4-6-0 in the country.  The real thing has a fast “chuff chuff” due to it’s four cylinders, so sounds unique too.

When I first returned to model trains, I really wanted a model of Lord Nelson, but this presented some problems.  The first being finding one – Bachmann produced this model as a limited edition.  The second problem was having one that worked on a digital layout.  Bachmann’s model employ’s the split-chassis mechanism and it is very hard to fit a DCC chip to it, even after accumulating much DCC knowledge, this is still something I would struggle to do (click here for more on this subject).

Eventually after looking around for some time I found a model of “Nellie” for sale that had been hardwired for DCC but had blown it’s DCC chip, so was sold as “repair or spares”.  I purchased it and hard-wired a new DCC decoder and it worked!  So far, so good…  The next problem I encountered was that despite the expense and effort spared, the model wasn’t that great.  The shape is fine, but the chimney was awful and finish wasn’t anything to shout about. 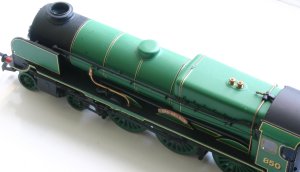 Removing the nasty rubber chimney supplied by Bachmann was simple, but fitting a white-metal replacement required drilling through the models’s body.  This made a huge difference to the model’s looks.  Since then, I’ve painted the shiny wheel rim’s malachite green (as they should be), the motion black and added cab details.

The result is a model that’s pretty good all-round!  No other model have I wanted to such an extent that I was prepared to search for the limited edition version, find one that had been DCC wired, re-chip it (with the risk of it not working at all afterwards), drill through the model body, source a replacement chimney and then spend hours improving the finish.  As a result, I have a fairly unique version of a model that works well, looks good and represents what is arguably Richard Maunsell’s most glamorous class of steam engine.  For those reason’s, this is my favourite!