This week’s model of the week is another regular performer at Locoyard and a superb model (click here for its’ review). 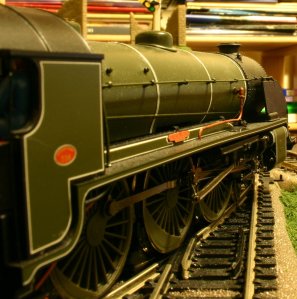 Although not the lowest numbered of its’ class, 736 Excalibur was the first and emerged from Eastleigh works in September 1918.  A product of the London and South Western Railway’s Chief Mechanical Engineer (CME) Urie; the N15’s proved more than capable of keeping to schedules set in the early part of their career, but as timings became shorter and higher speeds were required; performance inadequacies revealed themselves. 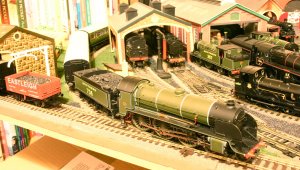 After the LSWR were absorbed by the Southern Railway in 1923, Maunsell modified the N15’s, improving their performance considerably.  New batches of the class were built to a slightly different specification, some by the North British Locomotive company (these were known as “Scotch Arthur’s).  Note that these differed from Excalibur; which has an original Urie-style cab.

The Southern Railway gave the class names from the legend’s of King Arthur, a clever marketing ploy!  The Southern Railway also gave them smoke deflectors and were therefore responsible for creating the shape and character of the class.  It is in this condition that Locoyard’s version is modelled.

When Bulleid took over from Maunsell as CME of the Southern Railway; he made attempts to improve the class – not that improvements were needed!  Excalibur was given a multiple jet blast pipe Lemaître exhaust and this necessitated having a wider chimney, which did not look good in terms of the locomotive’s outline.

736 became 30736 at nationalisation in 1948.  It was only a BR locomotive for 8 years and was retired due to its’ age and withdrawn in 1956 and then scrapped.  It was replaced by BR standard 5MT 73081, which took on Excalibur’s name.  BR standard 5MT’s were nicknamed  “Standard Arthur’s” by their crews.

Only one member of the N15 King Arthur class was preserved and forms part of the National Collection – 777 Sir Lamiel.  I hope you’ve enjoyed reading this week’s model of the week, thanks for reading folks 🙂