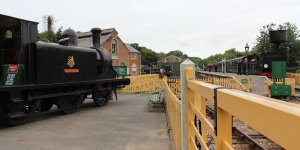 Following a previous blog post on the Isle of Wight Steam Railway’s O2 class W24 Calbourne, we have a brief look at other locomotives that can be found at Havenstreet.  Firstly we have the unique E1 class that was reported on before (click here for more), however since then it has been re-named Yarmouth. 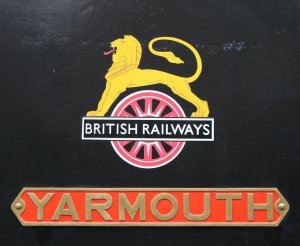 We move on to another locomotive that has it’s origins in the London Brighton and South Coast Railway – A1X terrier class W8 Freshwater (below).  Built in 1876, this terrier tank engine was originally named Newington and numbered 46.  It moved to the Isle of Wight in 1913 when hired by the Freshwater, Yarmouth and Newport Railway who purchased it outright in 1917.   When the line was absorbed into the Southern Railway in 1923 it was renumbered from 2 to W8 and named Freshwater, the name, number and livery it carries now.  Being an Isle of Wight terrier, it has a larger bunker, although it was to return to the mainland in 1949 to work on the Hayling Island branch until 1963.  It’s career continued for three years on the Meon Valley Railway and it was then preserved at Brickwoods (a former brewery in Portsmouth) and then outside the Hayling Island Public House as a sign!  W8 returned to the Isle of Wight in 1979 and has since had more than one stint in service that required the purchase of a brand new boiler in 1998. 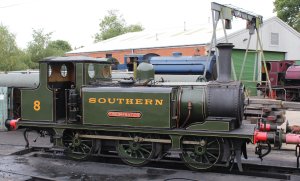 The next two locomotives are of industrial origins – Hawthorn Leslie 0-4-0ST Invincible and Barclay 0-6-0T Ajax (click to see a little more of these locomotives). 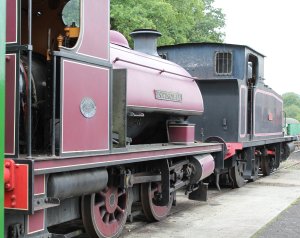 Last but by no means least are two Hunslet Austerity 0-6-0ST locomotives.  Firstly (below) is WD198 Royal Engineer (click here to see some pictures of WD198 in action). 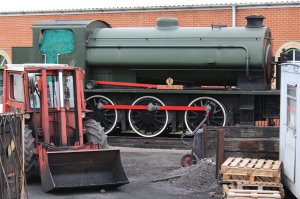 Secondly is WD192 Waggoner (click here to see some pictures of WD192 in action).