I recently visited the Isambard Kingdom Brunel birthplace memorial in Portsmouth. The memorial features some of Brunels engineering wonders including  like one of the towers from the Clifton Suspension bridge and the propeller from the SS Great Britain. 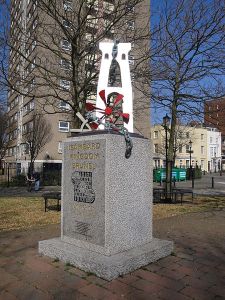 Brunel was believed to have been born in No. 1 Britain Street, which was close to the site of the original plaque. This area of Portsea had been heavily damaged in the war and in the late 40’s and early 50’s the City Council began developing it for new housing. By the time they were made aware that they proposed demolishing Brunel’s birthplace it was too late to save it. Although there was some doubt that Brunel’s birthplace had been correctly identified, a plaque had been fixed to it’s front wall. It was of the same size and shape as the current plaque but it is not known for sure that they are one and the same. The second memorial was unveiled in 2006, the bicentenary of Brunel’s birth, as it was felt that the original didn’t do justice to the memory of one of Portsmouth’s most famous sons. It wasn’t until March 2007 that the sculpture was added to the plinth.

The inscription reads:
ISAMBARD
KINGDOM
BRUNEL
BORN PORTSEA
9TH APRIL 1806
Unveiled by the Right Worshipful the
Lord Mayor of Portsmouth
Councillor Robin Sparshatt
on 7th April 2006 to commemorate the
bicentenary of the birth of
Isambard Kingdom Brunel
Sponsored by Colas Ltd. and Veolia Environmental Services
Thanks for reading
Simon 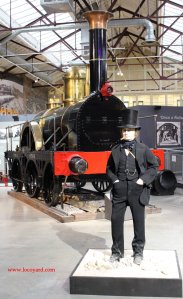