Although the Model of the Week series has come to and end, we still will look at the history of the prototype’s represented by model locomotives in special blog posts, of which this is one!  Today is a special look at a GWR member of the Locoyard fleet of locomotives.  This is a Bachmann model well worth checking out (click here for it’s review) and a type with an interesting history….

Often the term “prairie” is used to describe any large great western tank engine, but this is incorrect.  You probably can guess that the term comes from the United States of America and it is a term that can be used for any locomotive with one leading axle (two wheels), three coupled axles (six wheels) and one trailing axle (two wheels) – a 2-6-2 wheel arrangement.  So  Gresley V2 4771 Green Arrow is a prairie locomotive and a GWR 56xx 0-6-2T is not.  Built in 1924 at Swindon works, 4555 was a member of class of a prairie tank engine that was first introduced in 1906 – the 45xx.  Churchward, who was Chief Mechanical Engineer of the Great Western Railway used best practice for his designs and his adoption of the 2-6-2 was through American practice.  The vast American Railroads were often lightly laid and the prairie arrangement worked well on these, as there was much benefit to be had from having a leading and trailing axles.  Seeing the similarities to the GWR’s rural and secondary routes to these railroads he created a prototype 2-6-2T in 1903.

The experiment was a success with some modifications.  Two broad types of prairie tank resulted, known as the large and small prairie tanks.  The small prairie tank was the second type produced, beginning with the 44xx of 1905.  They were a compact and powerful type (particularly when given superheated 180lb/psi boilers)  with rapid acceleration, but their small 4ft 1.5in driving wheels didn’t lead to much in the way of speed.  Therefore 4ft 7.5in driving wheels were given to the class that superseded the 44xx – the 45xx.  The 45xx were first introduced in 1906, and had an increased boiler pressure of 200lb/psi.   4555 was the first to have outside steam pipes an improved superheater and larger bunker built as standard.  75 45xx class locomotives were built in total with a further 100 of the 4575 type built (these were Collett’s near identical version with larger water tanks). 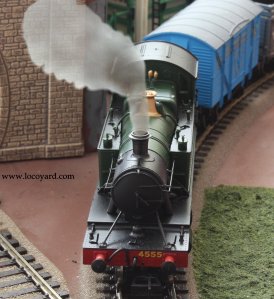 Being a mixed traffic locomotive built for rural and secondary routes, 4555 had a fairly uneventful working life.  At the nationalisation of the railways in 1948, it was based at Machynlleth in Wales.  Towards the end of it’s working career and the beginning of it’s life in preservation, 4555 became associated with the Dart Valley Railway (now the South Devon Railway).  It worked the last freight service on this line in 1962 and then in 1969 it hauled the first passenger service in 1969 when the line was reopened.  Ironically enough, no other than Dr Beeching was aboard this service!  In between 4555 was withdrawn in from Plymouth Laira and purchased directly from British Rail in 1965.

In 1973, 4555 was moved from the Dart Valley Railway to the Torbay Steam Railway (the Paignton and Dartmouth Railway).  At the time, they were both owned by the same organisation.  Since then 4555 was named “Warrior” and has proven to be as useful and powerful as the class did when first introduced over a hundred years ago.  4555 is still there to this day and was last steamed in 2007.  It now awaits its overhaul to be brought back into service again.

One of the things that I find particularly remarkable about this class is how advanced they were for their time.  British Railways rated them as 4MT – which is a significant power rating for such an old yet compact design.  The lineage of the BR Standard 4MT 2-6-4T design (click here to read about another member of the locoyard fleet, 4MT 2-6-4T 80009) can be traced back to the 45xx, which speaks volumes as to how good this this class was.  I hope you enjoyed read about this locomotive.  Don’t forget that links to other model prototype histories can be found in the Loco Model Page (click here to see more).  Thanks for reading folks!