During the Saturday of the Watercress Line Spring Steam Gala 2014, this magnificent locomotive spent the day at Ropley.  It was (as Simon described it) playing the role of the Thunderbird – the rescue locomotive.  It was good to see this big powerful locomotive again, after it’s long stay at the Bluebell Railway. 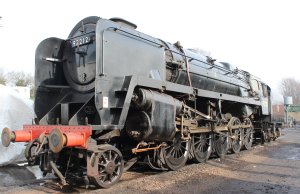 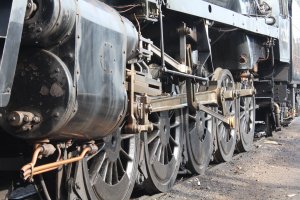 Designed to be capable of pulling 900 tons at an average of 35 miles per hour, after a few teething problems were ironed out the class soon proved themselves capable of greater feats; managing to pull loads of more than 1,000 tons.  They also proved more than capable of express passenger duties, indeed they were also very good at this task, leading many to consider them to be the ultimate British steam engine class of any type.  Famously, on 16 August 1958 92184 was recorded running down Stoke Bank at 90MPH!  The classes smaller driving wheels and lack of speedometers meant that British Railways soon put a stop to fast running!

The class was designed at both Derby Brighton works in 1951.  The first proposal for a heavy freight locomotive looked very different to the 9F and was a 2-8-2 adaption of the BR Standard 7MT (Britannia) class.  However the success of Riddles 2-10-0 austerity design lead him to use a 2-10-0 wheel arrangement.

92212 was one of 53 (of 251) members of the class that were built at Swindon works, the remainder being built in Derby.  It was built with a double chimney and has a BR1F tender that was capable of holding 5,625 gallons of water and 7 tons of coal.  During it’s career it was based first at Banbury before spending a few months on the Somerset and Dorset Railway in 1961 (based at Bath Green Park .)  This is the condition that it has been preserved in.  It soon moved on to Ebw Junction later the same year and then on to Tyseley.  It’s final spell in service saw it based in Carnforth where it was withdrawn after some 2 years in 1968 at the end of steam on British Railways. 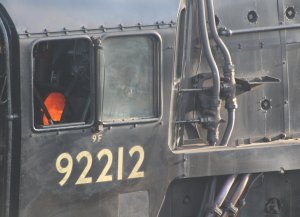 Fortunately 92212 was sent to Woodham Brothers scrapyard in Barry, South Wales where it survived until being purchased in 1979 by 92212 Holdings Ltd.  At first the locomotive went to the Great Central Railway.  In 1996 it’s restoration was completed and once again it was steaming.  92212 has since moved to the Mid Hants Railway where it is now based.  After it’s 10 year boiler ticket expired it was overhauled and purchased by Jeremy Hosking.  It was returned to service to mainline standards in 2009, however it has never run on the mainline (nor will any 9F for the time being) due to the risk of the flangeless wheels riding up and over the pointwork.  Until very recently the locomotive was on long-term loan to the Bluebell Railway where it had the honour of pulling the first public service train to East Grinsted since the northern extension was completed.