After my popular review of the Hornby Castle class I have decided to do a review of the GWR’s top link locomotive King class. The model I will be looking at is part of the Royal Mail ‘Great British Railways Collection’ and comes with several special additions.

The King class was designed under the direction of C. B. Collett, as an enlarged version of his Castle Class, which in turn was an enlargement of George Jackson Churchward’s Star Class. The Kings were designed partly to meet future traffic requirements, but was also a response to the Great Western Railway publicity department’s desire to regain the title of having the ‘most powerful express passenger steam locomotive in Britain’, which had been taken from the Castle Class in 1926 by the Southern Railway Lord Nelson Class. The Lord Nelson gained the title due to its impressive Tractive effort of 33,500 pounds force but the Kings smashed that by achieving 40,300 pounds force. They were engines to be reckoned with, powering the Western Region’s crack expresses like the Cornish Riviera Limited up until the end of regular steam hauled express services on the Western Region.

The locomotive which will be the subject of my review is King William IV, which was the third King class to be built at Swindon in July 1927.  Her first shed allocation was Plymouth Laira and was the first King to be allocated there after King George V and King Edward VII were stationed at Old Oak Common. She had a double chimney fitted in March 1956. But was withdrawn 6 years later in September 1962 and scrapped in Oldbury with her last shed allocated being Wolverhampton, Stafford Road.

6002 ‘King William IV’ is a quality locomotive but its not until you place it next to one of premium range Castle classes that you notice what is missing. The front end of the King class does feature lamp irons and some rivets but compared to the real life Kings there is a lot missing. Also in cab area the King features a typical unpainted Hornby back plate where as the Hornby Castle has an incredibly detailed and realistic cab. The tooling for the King was designed in the early 2000s and is in need of an upgrade. There is nothing wrong with her but compared to the models Hornby has done since of top link LNER, LMS and Southern locomotives, the Kings have fallen behind.

First impressions of the locomotive are positive and she captures the look of the real life locomotive really well. The look can greatly improved by some weathering and real coal.

The finish is another area where the King class has improved upon the older  GWR models as the GWR Green has more depth and the lining is far more crisp. The lining is a little thick compared to the prototype but still a big improvement on previous models. 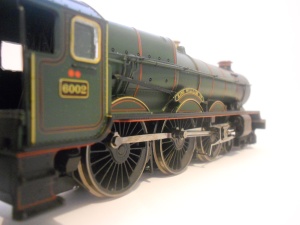 The King is an extremely smooth runner and ran brilliantly straight out of the box. The locomotive has pick ups on the 3 drive axles on the locomotive and the 3 tender axles which contributes to the locomotives smooth performance. Her performance is affected however by her front bogie which if it jumps the rails will create a short circuit and stopped all operation on the layout. This is something that I hope Hornby will address on the new King.  I added a little bit of weight to the bogie on mine and it sorted out the problems I had.

Power is something this locomotive has in spades and comfortably hauled a train of 18 coaches. In terms of performance she out hauled the Hornby A4 and the Bachmann A1 which have should have more prototypical power.

This is where the review gets tricky she has everything that you would expect including NEM coupling’s,  a good motor and excellent performance.  DCC fitting is very simple and has lots of room in the tender if you wish to add sound. The locomotive being a special edition means it comes with a lot of additional things such as a exclusive Royal Mail Presentation stamp, an individually numbered and certificate and a special presentation box.

The answer is a simple NO! the RRP on this model was £150 and for that price she is a model for collectors and not modellers. However I managed to pick one of these up on a well known auction site for £50 which is a good deal.

Despite all the negative things I have said about her, the locomotive at the time it was originally tooled was a great improvement on what went before it.  King William IV is a beautiful locomotive which would look right at home racing down the Great Western’s mainline from Paddington to Bristol or taking its time ambling along a preserved line. I would suggest getting one of the ‘normal’ Hornby models as they are far better value for money, but I just have a niggling thought that Hornby must have a new King in the pipeline… So the lifespan of this King may be limited.