A shameless plug for my home railway’s upcoming gala – the Cotswold Festival of Steam on the May bank holiday – 24th to 26th May 2014. The theme for this year’s gala is “Back to Black” featuring most locos in BR black. After all, black was by far the most common livery on the national network; green (and occasionally blue or maroon) being reserved for express and some mixed traffic locomotives. The event will feature a total of 8 locomotives in steam, most black, with the odd green one thrown in for good measure (and to keep the GWR enthusiasts at bay!)

So what’s going to be happening? Let’s start with the locomotives…

Now a resident at the GWSR, this locomotive has just emerged from a 10 year overhaul from Tyseley and Ian Riley’s. For this year only, and for the first time in preservation, Dinmore Manor will be appearing in unlined black. You can read about Dinmore Manor on her blog, revel in her lovely new livery on her Flickr site, or take a look at her Facebook page.

2807 has been at the GWSR almost from the very start. Arriving in the early 80’s after a long drawn out restoration she returned to steam in 2010, just missing out in the 175th anniversary of the GWR. She will not be appearing in black, but in GWR green. Currently she is at Tyseley having work done on her horn guides, but she should almost certainly be back in time for the gala. 2807 also has a blog, and a website too.

Repatriated from Turkey, it is owned by the Churchill 8f group. This locomotive has seen a varied life, being built for the war department, but not needed so went to the LMS. It then went on to Turkey where it saw active service until the late 80’s. After a brief visit to the Swanage railway, it was withdrawn and moved to Toddington where it first steamed at the GWSR in 2010.

Full of character, this little loco has been nicknamed PFP or planet’s favourite prairie. This loco is also not in black, again appearing in GWR green with shirt button logo. First steamed in preservation in 2002, it had a rapid overhaul during 2012 and travels all over the country, most recently to the battlefield line. It makes regular appearances at the SDR and the WSR as well as the GWSR. The group also own a couple of auto coaches, as their engine is auto fitted. You can read about the latest news about both the engine and their auto coaches on their website and on their Facebook page.

This huge GWR tank engine will HOPEFULLY be ready for the gala. Originally designed to work in the harsh conditions on the welsh coalfields, it moved to the GWSR briefly in 2003 when restoration work started, moved off, then came back again where it is nearing completion. It is owned by Jeremy Hosking, and if completed will be the third and final loco to not appear in black, being in GWR green (not sure whether it will be “great western” or shirt button GWR though)

Moving onto visiting engines, we have… 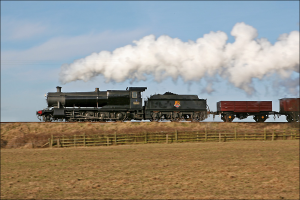 Also owned by Dinmore Manor Ltd. she is a later cousin to 2807 with a number of improvements. She comes to us courtesy of the West Somerset Railway.

What line up of black locomotives could be complete without a “black 5?” The most numerous and perhaps most successful steam locomotive ever built, this will be the first time a member of the class has run on the railway in preservation, although they were a common sight on the railway during the last few years in existence. This locomotive is normally based on the Mid-Hants railway.

A chunky little pannier tank, it comes from the Severn Valley railway who bought it from a colliery ten years after it was withdrawn by BR.

That’s what’ll be pulling the trains, but there will be another few locos…

This monster locomotive is a rebuilt merchant navy, numerically next to Simon’s Canadian Pacific he is helping to strip down at Eastleigh. 35006 will be on display in the car park like last year, possibly in light steam. It is hoped she will be ready for action by the end of this year (as she was hoped to be last year, and several years before that – you can’t rush these things!) You can read about her on going restoration on her Facebook page.

Yet another Dinmore Manor locomotive Ltd loco, this one is in quite a sorry state. A younger version of 2807, it will be some time before she will steam again, still being in Barry condition. She too will be on display in the car park. Her restoration on site should be beginning shortly now that Dinmore Manor is up and running. When her restoration gets going, you can read about it on their blog and maybe on Dinmore Manor’s Facebook page (link further up) too.

The first locomotive built by the newly formed LMS, it is originally a midland railway locomotive. Arriving on the railway in 2009, it is owned by the NRM and apparently (that being the key word…) will be operational by the end of this year.

For £85 you can have a footplate ride on any of the home fleet tender locos. This really is an amazing experience not to be missed.

Therein concludes the locomotives, but of course there is much more. Behind the engines (my area of concern) there will be three rakes of 6 carriages, to chocolate and cream sets and one maroon set, an improvement on last year with both more carriages, last year’s “mixed set” now being uniform and almost all the maroon rake has had a freshen up over the winter.

As in last year, brake van rides will be offered for £5 per one way trip, and this year also a £10 return. you can also choose which break van to ride in, one toe enjoy the scenery, or one to get up close and personal with whichever loco is pulling the train (locos should be rotating round so they all get a turn)

There will also be a number of trade stands, from preservation societies to model railway stands. Morton media group (who publish heritage railway) are sponsoring the event and will also have their stand there.

There will be an antique bus service to view the amazing progress at Broadway station; hopefully by 2018 we’ll have steam trains there!

The Narrow gauge line will also be running, featuring WW1 German locos running to a small museum (one of many dotted around Toddington!)

There will be a selection of classic cars and bikes at Toddington and some traction engines at Winchcombe, also at Winchcombe the model railway post office coach will be open.

You can also go along to the engine sheds along the viewing path and poke your camera round the corner, but you can’t actually enter the engine sheds this year, however C+W are doing tours of their workshops at Winchcombe.

I’m sure there’ll be plenty of other bits and pieces to look at and do as well; I expect Gotherington station will be open, but I haven’t seen it written anywhere yet.

You can buy tickets in advance here for one, two or three days, or new for this year, evening tickets. Normal tickets will also cover the evening, but of course the evening only tickets are cheaper. They are valid from 15:45 right up until the last train at 10pm. I’m definitely going for this option. Day tickets can be booked in advance, but evening tickets are on the spot only. Just a note of caution, tickets are purchased when entering the stations, and you have to buy a ticket to be onsite. Some people have had problems with this in the past, the reason is that generally trains are so packed it is difficult for TTIs to inspect tickets whilst on the train, so this just makes it that bit easier. If you go round taking line side pictures, that’s fine, but we’d like it if you could perhaps come along and buy an evening ticket, as although pictures are lovely, money’s better!

As to getting here? Well you can get the train to Cheltenham spa and catch the D bus service right outside the station to Cheltenham racecourse – about a 10 minute walk from CRC station. There’s loads of car parking at CRC and a good amount at Toddington on the field, but not in the main car park. There is no parking at Winchcombe due to displays etc.

Please come and support the event, it’s shaping up to be something brilliant. If you feel like it, while you’re there I’m sure there’ll be someone rattling a pot for Broadway, please put some pennies in, it all counts. Literally the only thing standing between us and Broadway is money. Once we have the money, it’ll only be about 3 years before trains come steaming in.

One final note, this isn’t official so don’t take this as gospel, most of the info is off the event pages which you can view by clicking the top picture, or what I’ve garnered of National Preservation. Even if I was right at the time, these things can all to easily change, especially loco breakages (although we won’t have any of those!) 🙂