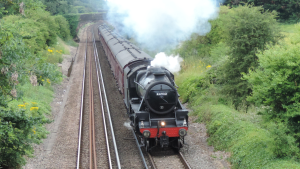 On Saturday evening I had the rare chance to catch some mainline steam in the Portsmouth area. It was the perfect opportunity to use a new location I have been wanting to try. The train was called the “Royal Wessex” which recalls the days of named steam trains from the 1950’s on the former Southern Region of British Railways. Originally the express was going to be hauled by Tangmere on the first leg and Braunton on the return leg but unfortunately both had to be replaced and Black 5 44932 had to do both legs. 44932 has become a real Thunderbird on the south coast hauling the majority of the mainline specials due to other locomotives failing. 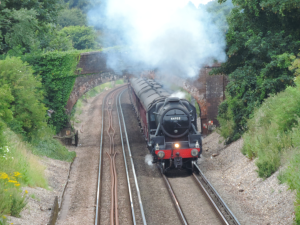 My new location was a quiet bridge on Mill Lane in Bedhampton which is on the Portsmouth main line, to the west of Havant where the line is joined by the coastal route from Chichester, Bognor and Brighton and to the east of the triangle where the line diverges for Portsmouth Harbour and Southampton. The location is really nice but some branches ruin a nice side ways shot. 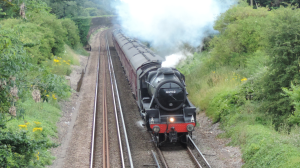 Anyway I hope you enjoy.