The Bluebell Railway has always been one of my favourite places.  As a child, planned visits to the Bluebell Line were anticipated with much excitement that would build up as the date approached, all the while devouring books, leaflets, magazines and brochures containing pictures an articles of it’s incredible fleet of stock.  And then the day would come and no matter the weather nothing would spoil what always ended up being an incredible day out.  Now we fast forward to 2014 and despite much that has changed in my life, I can maintain that the Bluebell is not just as good as it was when I was young, it is somehow even better…

A visit to the Bluebell Line was well overdue.  In 2013 I didn’t visit the railway at all for various reasons, all down to personal circumstances.  A couple of weeks ago, shortly after moving home my wonderful wife had been doing some research on events in the south east and asked me whether I liked the sound of the “Sussex Food Festival”.  Both my wife and I love such events.  Now I know they’re not everyone’s cup of tea, particularly as the food isn’t exactly cheap, but that being said if you compare it to a takeaway or pub then it’s not all that bad and very very yummy!  I was ignorant to the fact that this food festival was held on the platforms of Horsted Keynes station, so when my wife told me where the festival took place, I was thrilled! 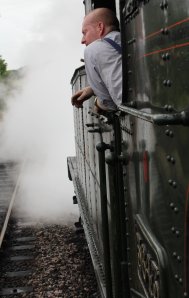 It was a wet morning, but this didn’t dampen our spirits as we headed out to Sheffield Park station to catch the first train of the day last Sunday.  Getting there early not only makes for a comfortable ride on the train, but also got us to Horsted Keynes station as the event opened and when the food was its freshest!  We didn’t have time to look around when we got to Sheffield Park, but a cursory glance revealed it was the Furness Railway’s trust visiting 56xx 5643 at the helm.  Although not the locomotive rostered to run that weekend, I was pleased to see it, as it was another locomotive to tick off the mental trainspotters book!

Don’t let the above picture deceive you, it wasn’t long until Horsted Keynes station got very busy.  Full credit must go to the event organisers because there were a truly fantastic selection of suppliers, including what I can only describe as the most delicious sausage roll’s I’ve ever eaten.  We found this out how good they were when we ate them at East Grinstead.  We were a little disappointed to find they had all sold out by the time we returned!

With a rucksack full of delicious food we boarded the next train to East Grinstead.  This time the train consisted of vintage 1930’s Maunsell and older South East and Chatham Railway (SECR) stock hauled by the beautiful SECR C class 592.  This locomotive is one of a number of classes to be found on the Bluebell Railway’s fleet that is unique and beautiful.  The railway effortlessly oozes heritage at every corner.

It was now time to see a whole section of line I had not had the pleasure of riding along before.  The railway meanders through some of the most gorgeous rolling rural landscapes you are likely to see on any line.  The northern section heading from Horsted Keynes was no exception.  The Bluebell Railway has always been a special place, but it now has a route to make many-a-line envious.  As well as glorious countryside the line has a tunnel and a viaduct, adding some variety to the route.  It also now connects to a real civilisation with a mainline station – East Grinstead. 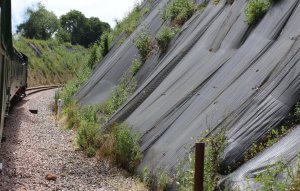 For me though, the highlight of the ride was Imberhorne cutting, pictured above on the return trip.  This is one of the least scenic sections and indeed even has land-fill waste evident towards the surface.  But believe it or not, this is the thing that makes it special.  Imberhorne cutting represents a mammoth scale achievement for a preserved railway.  The reason the line has several visiting locomotives including 56xx 5643, Prairie Tank L.150 and some diesels (until a few years ago the railways was 100% steam) is that they had to pour so many resources into digging out a cutting that had been turned into a refuge tip.  90,000 tonnes had to be removed, before the the ending of the Landfill Tax Exemption Scheme in 2012, which would have increased costs significantly.  It should be added that the railway now needs to catch up on many overhauls of its home fleet of locomotives and donations will be gratefully received for their “Keep Up the Pressure” appeal (please click here to read more.)

It was very special for me to arrive by train at East Grinstead.  I remember reading about the aim of the Bluebell line to reconnect to this market town in the 1980’s and 90’s, so it was quite moving when the train terminated at this new station.  The town is worth a visit, it has a few shops and a pretty high street.  We returned hauled by 5643, but this time we had time to take it in!  It hauled a set of mark one carriages, with one Bulleid vehicle.  I made the point of riding in the Bulleid coach on the return trip to Horsted Keynes, providing something a little different to enjoy (click here to find out a little more about rolling stock on the line) . 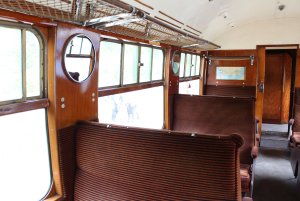 We did not get off at Kingscote, but could see from the window that the station was typically well kept and suitably atmospheric. 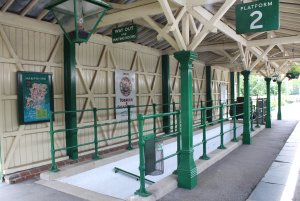 The Bluebell Line has so much to offer the visitor.  A day almost isn’t enough to see it all!  Exploring Horsted Keynes is a must, not only when a food festival is in progress!

The station is full of stock, including a few locomotives that can be spied, such as the BR standard 4MT 4-6-0 75027 above.  However, it is the line’s rolling stock (click here to read more) that takes pride of place at Horsted Keynes.  The carriage and wagon workshop has a viewing gallery that’s well worth a look.  I was reminded of my days working in the aviation industry in this building – it was clean, organised and thoroughly professional.

Sheffield Park is the home of the operating fleet.  It was here that I got a quick look at SECR H class 263 pull away as it hauled the “Wealden Rambler”, another unique machine (click here to read more.) The Railway have a collection second only to the National Railway Museum (I believe).  One of the things the line is especially good at, is being colourful.  Locomotives are often represented in the colours of the pre-British Railways days, which lifts something as common as a West Country class (unrebuilt) pacific into a malachite green rarity!

Of course, the line is famous for being the home of “Stepney the Bluebell Engine” of original Rev W Awdry’s “The Railway Series” (or Thomas the Tank Engine and Friends, as you probably know it!) 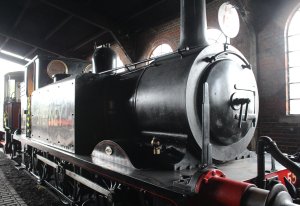 In the shed, the frames and tender of unique Maunsell Q class 541 could be seen (see below), one of the locomotives that the railway hopes to have running again soon.  Don’t forget the “Keep Up the Pressure” appeal (please click here to read more!)  To see more locomotives to be found in Sheffield Park, please click here.

As you have probably gathered, my visit to the Bluebell Railway was fantastic!  The railway is a beautiful place and very special.  I have been fortunate in my life to have visited a number of places, perhaps not as many as others, but still enough for me to realise that the Bluebell Railway is important internationally.  I said at the beginning of this piece that the Bluebell Line has always been one of my favourite places, well I’d say it is one of my favourite places in the world!  It is worth traveling a long way to visit and now that it can be easily reached by train from London, it makes it easier to arrive than ever before.  Thank you to the Bluebell Railway for a wonderful day and sorry to have not visited for too long!  Thanks for reading folks 🙂

4 thoughts on “The Beautiful Bluebell Railway”