Those who love teddy bears of the fluffy variety need not worry; none were harmed in the making of this blog post!  Today we are looking at a teddy bear of the railway variety, specifically the class 14 diesel-hydraulic locomotive.  14901 is pictured on Peak Rail (click here for more,) running as tail-end charlie for passenger services with Hunslet Austerity Lord Phil operating at the other end (click here to read more.) 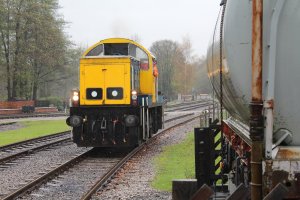 This class of locomotive are known by enthusiasts as teddy bears, because when looked at front-on they look like a teddy bear’s face.  The nickname was immortalised when being built in Swindon works by the foreman, George Cole who said “We’ve built the Great Bear, now we’re going to build a Teddy Bear!”

14901 is unique amongst members of its class.  It is the only one to be powered by a Rolls-Royce DV8TCE power unit that generates 640bhp at 1800rpm, with other members using a Paxman 6cyl 6YJX Ventura V-type turbo-charged engine.  It was re-engined by BP Grangemouth.  It also has a unique TOPS number and livery.  It’s number and BR blue livery are fictitious as the class were all withdrawn pre-TOPS.  Indeed, the 1964 built locomotive only worked with British Railways until 1969, numbered as D9524..  The number was given to the locomotive in 1991 and to be fair has carried it longer than any other in its career.  The blue also makes it rather unique and suits it well in my opinion.

Much is said about the wastage of steam locomotives during the 1960’s but not so much about much about the needless resources put into some of the diesel locomotives that followed.  Many types were untested and didn’t perform so well, but the class 14 was not one of them.  It’s short life was down to it being designed for short trip workings, transfer freights and yard shunting – duties for which there was a much reduced requirement when they had been built.  However, that being said, most of the class soon found private owners and remarkably 19 have survived of the 56 built with two even being used to help build the Channel Tunnel! 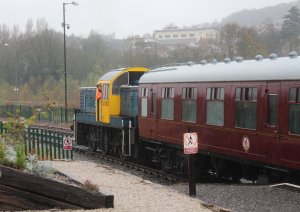 Regular readers of this blog will know that my favourite DMU class is the Hastings “Thumper” Unit class 205, but probably don’t know that my favourite shunter is the class 14.  I have fond memories of seeing them on the Kent and East Sussex Railway as a child in the 1990’s.  Capable of running at 40mph, they are particularly useful on preserved lines.  Passenger services are restricted on heritage lines to 25mph and they can therefore keep to a timetable better than the far more numerous class 08 that is only capable of 15mph.

14901 is owned by Andrew Briddon, who also owns the locomotives pictured below.  Andrew has an excellent website well worth checking out (click here to read more.)  Thanks for reading folks! 🙂