Today is part 3 of my mini series looking at the layouts that were on display at the South Hants Model Railway Club 2012 Exhibition. I uploaded the first 2 parts before Christmas and forgot about the third, so today I am catching up so up first we have:

Up first we have Portskerra a Highland Railway layout in EM gauge. The track used is from C&L models with the point work being handbuilt on plywood sleepers on the interlaced style, all sleepers being of standard length. This type of construction was popular with the smaller railway companies as it was cheaper but required more maintenance to keep in good condition.

Buildings are based around Highland designs, the goods shed is based on Brora, the station takes ideas from Wick and Thursom but made as a single track, The loco shed is similar in style to Thurso and Fochabers Town, the stone buildings are made from Wills shed, the goods shed from milled wood. The signal cabin is temporary and is a modified Ratio kits.

–
Redford Junction
–
The last layout of the day is Redford Junction a lovely 3mm layout. The LBSCR in the 1860’s planned to extend their Chichester to Midhurst line to connect with the LSWR at Haslemere. In reality the line was never built, but this model is an interpretation of what could have been. Centred around the planned intermediate station at Redford, it assumes an end on Junction between the LSWR and LBSC systems. The LSWR connection being electrified and served by services from Haslemere and Guildford, the LBSC connection retains a rural atmosphere with services from Midhurst and Chichester. There is a motive power depot, a sub shed of Horsham, and EMU stabling.
The model is built to a scale of 3mm to 1 foot and can be operated in the Southern railway or post nationalisation eras, with locomotives and rolling stock typical of those periods.
Apart from old Tri-ang models which were manufactured in the 1950’s & 1960’s, there is very little available in this scale from the proprietary manufacturers, consequently all the trackwork is hand-built. Locomotives and rolling stock are built from scratch or kits with a few modified Tri-ang items. Buildings are made from scratch or have been modified from kits or proprietary items. 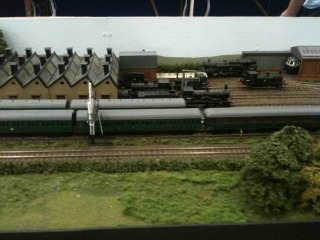 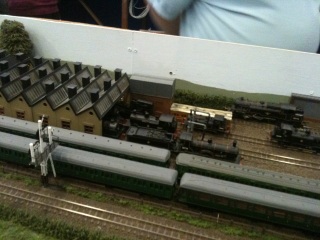 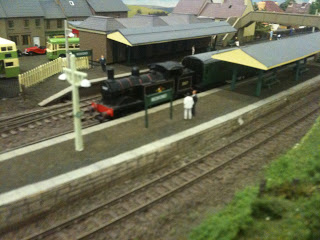 –
The layout was really lovely and some of the locomotives were amazing and had mostly been stretch built.
–
SE28
–
Now the last layout was something really special called “SE28” a 4mm finescale BR Southern Region layout.  Basingstoke and North Hants Model Railway Society’s SE28 is a freelance layout based on a South London theme and is designed around a loop line with links to the South East, Central and South West Divisions of BR(SR) and the West London Line. 00 Finescale track is used throughout with handmade points.
–

The layout is dominated by a 12 ft long 20-arch viaduct which runs the length of SE28. The viaduct arches were mass produced from resin cast in rubber moulds.

A low level freight depot which is complete with a gantry crane adds foreground interest to the layout.
–

A stopping service makes a brief visit to SE28’s station. Only the end of the station is visible the bridge forming a natural break to the viewing area. 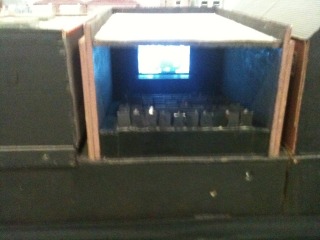 Finally I also made a little video of some trains running
Thanks for reading I hope you enjoyed looking backing at this great show.