I had the pleasure of attending the Mid Hants Railways Spring Steam Gala this year with fellow LocoYard writers Dave and Alex and it has to be said that the Watercress Line held another fantastic steam gala. With us attending the gala being on Valentines Day we weren’t sure what to expect, especially with the B1 running around Hampshire.  Attendances in terms of photographers seemed low but there were plenty of people riding trains.

The 2 headline stars of the gala were both top link pacific engines with the first being the now legendary LNER A4 Bittern. Bittern, that recently set a new steam speed record during the preservation era with her 90mph runs last year.  It is due to spend the final year of her boiler ticket at the railway before going to Crewe for overhaul. She is also the reason Alex attended the gala so it does prove that the railway has done a brilliant job to scoop her up for the year.

The other star of the gala was 70000 Britannia who had spent most of last year at Ropley whilst she had one of her set of driving wheels repaired. This photo (above) was taken just before her first run on Saturday and I planned to get a shot of her running past Wadebridge who was on the next road, however just before she set off she cleared steam from her drain cocks and she did not reappear from the steam cloud until she had passed the Harry Potter bridge! However I did get a decent shot of her later in the day as she pasted the Northside Signal which I am quite happy with.

One of the things that was most interesting about the gala was the freight train that was running shuttle between Ropley and Alesford. The train was hauled by Wadebridge and did allow me to get this photo which is my favourite from the gala. However I have got to admit that I hope at the next gala it is allowed to return to its traditional full length runs of the line. Although it means we would only have 2 trains (compared to 5 at this gala) a day we could get a far bigger train as being a shuttle service meant it was only running with about half of the wagon groups train. 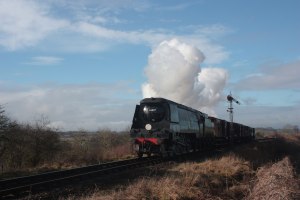 With 3 LocoYard bloggers at this one event there was a good chance of us all having similar photos so at one point myself and Dave tried different visiting different locations for a couple of trains to see what results we get. Dave headed to the foot crossing at Northside Lane and I headed up a road to get some photos of the trains going over the bridge.

The first of these trains experiments featured the two Maunsell locomotives 925 Cheltenham and 850 Lord Nelson double heading towards Alresford this was the first train out of Alton. With Lord Nelsons boiler ticket ending soon this could be one of the last times we see this particular formation and with her returning in BR Green it will be a long while before see 2 Maunsell locomotives together in this particular livery.

I also managed to get a shot of another member of the home fleet in the form of Black 5 45379 hauling the first RAT of the day out of Alresford. Over the next couple of days Dave will be doing his traditional in depth look at all the visitors and other interesting things from the gala and Alex will be posting his photos at some point 🙂

Until then thanks for reading.