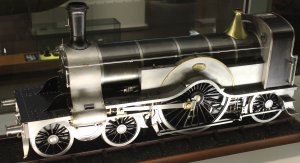 Personally this ready to run model announcement is one of the most exciting 00 scale news stories that we have ever had.  Locomotion Models will be producing a 1:76 scale model of GNR 4-2-2 Single No 1 in collaboration with Rapido Trains.  This adds another manufacturer to the list of firms producing ready to run models of steam locomotives in the UK.  It is not the first 00 scale announcement by Rapido/Locomotion however, the other being the gas turbine powered British Rail APT-E, that surely couldn’t have been any more different to this Victorian prototype! 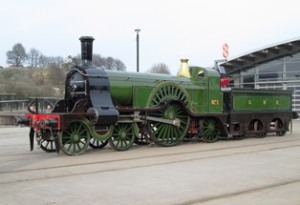 It will be available with either the original current (below,) or Sturrock tender (above.)  There will be DCC Ready or DCC sound options and it should be ready in Autumn 2016. 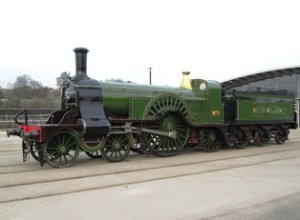 The only survivor of a class of 53 locomotives built at Doncaster between 1870 and 1895, no. 1 is part of the National Railway Museum and currently located at Shildon.  The class were impressive locomotives capable of speeds up to 85MPH.  Designed by Patrick Stirling to haul express trains from London to York by the Great Northern Railway, they had massive 8 ft 1in driving wheels which earned them their nickname as eight-footer’s.  They achieved fame in the 1895 Race to the North, when no. 775 reached York from London in just 1 hour and 16 minutes.

The reason why I’m particularly excited by this model is that it is a distinctly pre-grouping type.  Single wheelers were generally replaced by 4-4-0, 4-4-2 or 4-6-0 types, with preserved GNR no. 1 being withdrawn in 1907.  Hopefully this will be the first of many models of a bygone age, that is fairly overlooked by ready to run model manufacturers.

The model photographed at the top of this article is a vintage in its own right.  It can be found in the Science Museum London and is a 1:8 Scale Model of GNR Single 4-2-2 Built by Frank L Baines of Baines brothers in 1895.

Many thanks to Simon Kohler for supplying images of the Stirling Single.