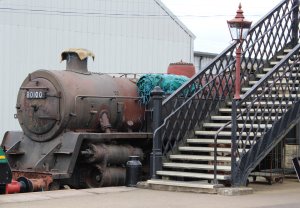 The Bluebell Railway’s collection of stock contains many rare and (now) unique steam engines.  Being the first standard gauge railway in the UK to be preserved, it had the opportunity to purchase steam engines that would otherwise have been lost forever.  Interestingly, it has also become the home to the largest collection of British Railways standard class steam engines – the penultimate British steam engine types.  Three of these standard class locomotives are 4MT 2-6-4T class engines, a type that operated services on the Bluebell line in BR days. 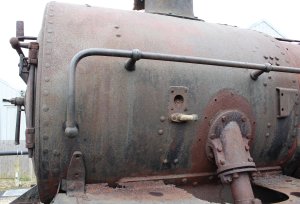 Although currently none are in service, two BR 4MT tanks (80064 and 80151) have steamed in preservation on the Bluebell Railway. However the third (80100) has yet to run and remains in scrapyard condition, only slightly more rusty as when it was purchased from Barry scrapyard in 1978.  Unlike 80064 and 80151, the Bluebell Railway own 80100.  The locomotive is a long-term project and restoration is planned to commence after the railway restore and convert BR Standard 2MT 2-6-0 78059 into Standard 2MT 2-6-2T 84030. 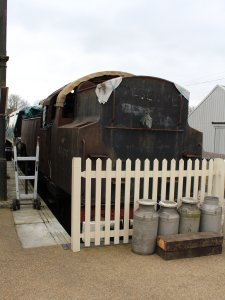 The locomotive currently rests in a siding next to the footbridge at Sheffield Park station, where it serves as a reminder of how many of today’s preserved steam engines looked before years of work by volunteers.  One day in the future, I’m sure we will see 80100 in steam and look back at images such as these with wonder. 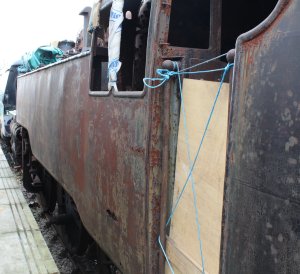 I am reminded of one of the stories of regular contributor John Anthony when I see 80100:

How silent it was at my old loco shed as, one by one, the steam engines were driven and dragged to their lonely grave yards to grow cold and rust into oblivion.  We locomen sometimes chatted of the old days, I think, deep down, we missed the sizzling and giggling of the old girls! Deep down in our hearts , we missed their coughing and wheezing, we missed their titanic struggles up distant inclines when they gasped “I THINK I CAN,,I THINK I CAN”, and when they reached the summit, they crowed “I KNEW I WOULD, I KNEW I WOULD” where their whistles would scream in triumph! 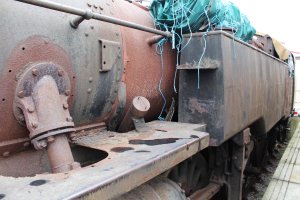 The picture below of 80151 gives us an idea of what this rusting hulk should one day look like: 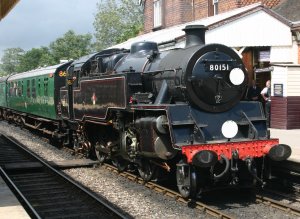 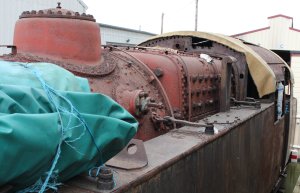