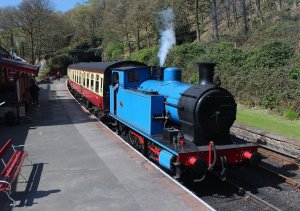 Continuing with the reports from my trip to north west England, today we reveal the mystery blue tank engine! Painted in a colour scheme not too dissimilar to Thomas the tank engine is the rather chunky looking Andrew Barclay 0-6-0T 1245; a member of the Lakeside and Haverthwaite Railway’s fleet. We will look at it in more detail in a future blog post, as today we look at the line that runs into the Lake District National Park. 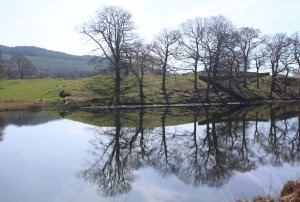 If I were to sum up the Lakeside and Haverthwaite Railway in one phrase it would be “short but sweet.” The trip takes 18 minutes each way, running a little over three miles from the southerly shores of England’s longest lake Windermere to Haverthwaite. 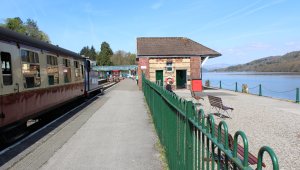 To make the most of a trip to the line, combined tickets are available to use other local attractions, including boat trips to Bowness and onwards to Ambleside. The overall experience of using the railway and boat together is an excellent way of making it a longer and more interesting journey. It was particularly impressive to see the effort put into making seamless rail to lake connections, with the train waiting patiently when the boat was slightly delayed. I would advise anyone making the trip to at least combine the boat and train. Indeed it’s worth studying maps or Wainwrights famous guides, as you could fit in a lovely walk in the Lake District for an even greater adventure. 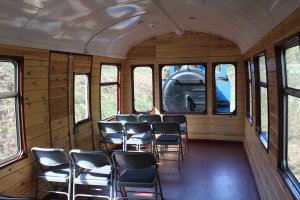 The short journey was made a little bit more interesting thanks to an ingenious Blue Peter style observation carriage as shown above.  These may not be the best seats to be found on a train in terms of comfort, but where else would you want to sit but here?! 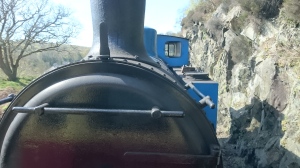 The railway is best known amongst enthusiasts for being home to the only two surviving Fairburn 4MT 2-6-4T engines – the only type credited to Charles Fairburn who was Chief Mechanical Engineer of the LMS for just two years. His career was cut short by aving a heart attack at just 58 (click here to read more).   I was hoping to see one of these rare machines in action, but missed it by just one day. The large tank engines tend (from what I’ve seen and heard)  to run at weekends, Mondays and Tuesdays.  Weekend services are usually heavier and apparently the line handles a lot of coach trips on Tuesdays. Smaller locomotives can handle the other service days.  To be sure though, please call the railway, just to have the best chance.  My wife and I were exceptionally lucky with the weather during our time in the Lake District and as a result we fitted our fell walking in at the beginning of our stay, just in case the weather was to turn!  Although I was initially disappointed to miss a Fairburn in steam, I soon grew fond of the blue industrial tank engine that was hauling us instead, a machine that in any case is around 40 years older. 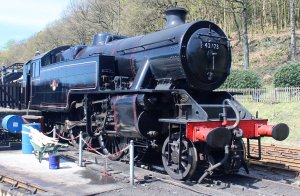 I’d also add full credit for the line in making its fleet of locomotives accessible. Both 42073 that was still warm from the previous days working and it’s sister 42085 were located conveniently for a good look. It was a marked contrast to the East Lancashire Railway, whose much bigger fleet were out of sight from the public. This proves that the size of a fleet of locomotives doesn’t always translate into a better experience for the visiting railway enthusiast.  Locomotives included an elderly precursor to the famous class 08 diesel shunter, class 11 7120 (click here to read more.) 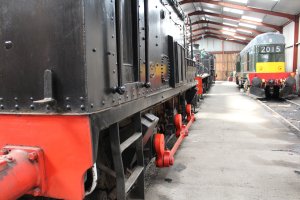 At Haverthwaite, non-operational locomotives are located in a very well lit engine shed that is usually open to the public. The locomotives had interpretation posters on them telling their history, another plus point in my opinion. A future heritage railway enthusiast is more likely to take an interest if they can understand what they are looking at.

Haverthwaite also had another trick up its sleeve – a fantastic café. My wife and I had a lovely cream tea, the scones being some of the best I’ve tasted (and this is coming from someone who’s grandparents used to sell cream teas in Devon!) If I was being picky, the only comment to the contrary I’d make is that it could be enhanced a little by having clotted rather than whipped cream, although I don’t know if that’s more of a westcountry thing. No matter it was very nice indeed! 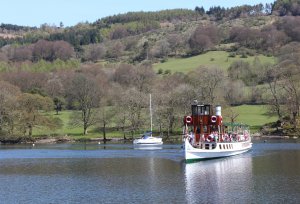 Hopefully you can see from this summary where I was coming from when I said that the Lakeside and Haverthwaite railway is short but sweet. Combined with a boat trip it becomes a long but equally sweet experience and ideal for a relaxing, scenic and varied day out. It’s just the thing if the weather turns wet, or (as was the case for us) when your legs need a rest from hiking.