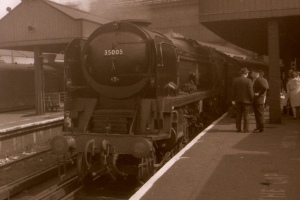 50 years ago Canadian Pacific was being recoaled and watered at Nine Elms following her morning trip up from Weymouth and was preparing for her return trip. Fresh out of an intermediate overhaul and with electrication being installed on the South West mainline this was going to be her best chance of breaking the ton and boy did she. She was rostered to work the 21-20 ex-Waterloo to Poole and it was this trip that Canadian Pacific set several records and her recorded top speed of 105mph. The fireman on that run was Dave Wilson and he kindly wrote a great piece on that run for us last year.

Beyond the nicknames, card schools, banter, cans of tea and cheese and pickle sandwiches the mess-room at Nine Elms also bred a rivalry in the running of trains. It was this jocular but ambitious rivalry which was largely responsible for the very fine enginemanship in those last two years of mainline steam hauled services. Gordon Hooper, Gordon Porter and Eric Saunders were all Three link drivers in 1965 – and it is their names which crop up over and over, (between them more than thirty appearances in the performance tables covering the South Western section), in D.W.Winkworth’s book  Bulleid’s Pacifics. It is no coincidence that a link of just twelve crew should provide such a high percentage of the most memorable performances.

In late Spring of  1965 the beginning of the end of ‘Southern Steam’ begins with a run from Waterloo to Basingstoke. On May 15th 1965 I was rostered to work the 21-20 ex-Waterloo, the driver was not my regular mate Eric ‘sooty’ Saunders, but another of three link’s drivers Gordon ‘madman’ Hooper. Driver Hooper had earned his sobriquet not for any reasons of insanity but for his fast and fearless running and I was about to discover just how ‘fast and fearless’ that was. This was the run which, both in Winkworth’s book and in Don Benn’s 1987 Railway World article ‘threw down the gauntlet’ (Benn, D. Bournemouth Line Steam – 20 years On, Railway World, July 1987, p408) for the final fling. Revised schedules were being introduced from mid-June 1965 with the commencement of the Bournemouth line ‘electrification’ – the crews at Nine Elms knew that once that juice rail started it was all up for the steam hauled mainline express.

The rest of this brilliant article can be found here

One thought on “50 years today”