Good evening, Tonight we are looking at the latest news coming out of the LMS Patriot team who are currently building 45551 The Unknown Warrior. 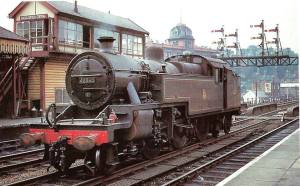 Founder and Chairman of the LMS-Patriot Project David Bradshaw has, with many others, long harboured an ambition to build a Fowler tank engine, as with the Patriot class all were scrapped by British Railways. David said, “The Fowler 2-6-4T is another of the missing classes of which none were preserved. It was a hugely successful design and was the forerunner of other 2-6-4Ts which were built over a period of 25 years”.

Using the skills and experience gained from building the new Patriot 4-6-0, the construction of a Fowler 2-6-4T is thought to be a more straightforward task. No change is required to the constitution of the LMS-Patriot Company for the building of 42424. The sooner ‘The Unknown Warrior’ is completed, the sooner the Fowler 2-6-4T Project can commence.

42424 was the last of a batch of 29 Fowler 2-6-4 Tanks which incorporated glazed side windows on the cab and other detail changes initiated by Stanier. It is this design which the LMS-Patriot Company plans to build. No 42425 was the first of a batch of Stanier 2-6-4 2 cylinder Tanks engines and it is for this reason that it is planned to reuse the last number in the Fowler 2-6-4T series.

The original batch of Fowler tanks were built in 1927 with a superheated parallel boiler designated G8S, based on that fitted to the 1902 Midland Class 3 4-4-0’s together with long travel piston valves. These engines were the first truly modern locomotives to emerge from Derby (the Royal Scots being a joint NBL/Derby effort) and it was this successful design which led to the Stanier 2 and 3 cylinder versions, the shorter wheelbase Fairburn examples and later the ubiquitous British Railway’s Standard Class 4 version built from 1951, which numbered 155 examples.

As has already been shown by the new Standard 3 Tank, which is under construction at Bridgnorth, there is a huge interest in Tank engines of this type. Tank engines are ideal sized engines for many Heritage lines and have lower running and maintenance costs compared to bigger tender engines. The new Fowler 2-6-4T will follow the same philosophy and will be built to run on Heritage lines only, albeit to main line running standard. If enough interest is shown further engines could be built.

A number of drawings and some parts already exist as the Irish Northern Counties Committee WT 2-6-4T class were based on the Sir Henry Fowler version, albeit to the 5’3″ Irish gauge. One of these locomotives No.4, has been preserved by the Railway Preservation Society of Ireland. It is currently stored awaiting overhaul at the RPSI’s Whitehead depot in County Antrim in N. Ireland.

Whilst we are not planning for actual construction to start until after ‘The Unknown Warrior’ is completed and running we would be interested in hearing from anyone interested in researching the class and locating drawings for which we have a full drawing list. Please email: chairman@lms-patriot.org.uk

This is a very interesting development from the LMS Patriot who like the A1 trust before them are looking to the future when there first engine is back on the mainline. This tank engine would fill a nice gap in our preservation scene and I for one cant wait to see it coming together until then, Thanks for reading