The Bluebell Railway’s U class no 1638 has officially been retired from service.  The locomotive was withdrawn due to it requiring repairs that although minor would have needed a hydraulic test and with just six months remaining on it’s boiler certificate, the line have sensibly been decided that resources should instead be put into the completion of the overhaul of British Railways “standard Arthur” 5MT 73082 Camelot which will have a potential ten years of life ahead of it.

1638 has been a very useful machine for the Bluebell Line over the past nine and a half years.  The railway relied on it to haul the brunt of their services whilst resources were diverted from the running fleet and put into completing the northern extension.  It’s fair to say that it will be missed by many, however being such a useful machine will no doubt help it or classmate 1618 to be fairly high priorities for overhaul in the future.  Now the only place you can see a U class in steam is the Swanage Railway, where the equally popular and reliable 31806 is based.

Fortunately the Bluebell Railway’s operational fleet has relatively recently been supplemented by Q class 30541 (above,) which alongside S15 class 847 (below) can provide enough power on the line’s heaviest trains.  All operational locomotives on the line can be found on their website (here.)  Overhaul’s of schools class 928 Stowe and rebuilt Battle of Britain class 34059 Sir Archibald Sinclair are progressing whilst the aforementioned 73082 is very advanced.  This overhaul can be tracked through regular updates posted on the owning society’s facebook page (click here to read.) 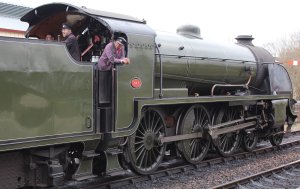